Signs a Guy Likes You

I remember when I was a little girl my friends and I would pick wild flowers in the field behind my house. I would hold a flower and think of a guy I liked and pick off petals saying, "He loves me. He loves me not." Now you don't have to pick the petals off a flower to tell if a guy likes you. You can watch his body language.

Animals like to show off and make themselves look good when they are attracted to the opposite sex. It's called preening. You may preen by touching or gently twisting your hair around your fingers when you are with a guy you like. Guys preen as well.

When a guy likes you he may:

A man may also signal he like you by:

The rest of his body may show he is into you as well. He could be talking to someone else, but if he notices you and he is attracted to you, he may angle his feet, his lower torso and/or his heart towards you and may not even realize it.

Notice his eyes to see if he is into you. When he looks you in the eye, his pupils (the black circles in the middle of his eyeballs) will get bigger if he likes you. If he likes what he sees he wants to see it well so the pupils dilate to take you in. Pupil dilation happens automatically when you are attracted to someone. Since a guy cannot control it, it is a great 'tell'. However it can also occur when someone is drunk or drugged or in low lighting so don't automatically whoop and say, "He loves me!" when a man's eyes dilate.
Posted by body language lady at 6/18/2009 05:33:00 PM

What Do His Eyes Say? Eye behavior, Attraction and Lying 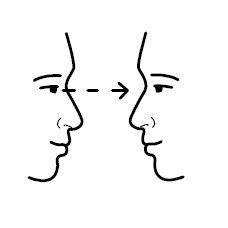 True or false - The meaning of eye cues
Recently a national magazine sent me these eye cues and asked me if the meanings they had listed by them where accurate. They where looking for cues that women could use to read men. Here are my answers.

• True or False: He flashes his eyebrows = He’s attracted to you - A guy raises his eyebrows in a friendly greeting as a signal of "I come in friendship and you don’t need to be fearful of my approach." It’s very primal. If the eyes were squinted into a narrow focus it would signal that the he may be zeroing in for attack.(In other words perhaps purely a sexual conquest.) If the eyebrow flash stays a moment longer it typically signals, “I recognize you and I am approaching in friendship." Picture the little cartoon bubble above the guys head saying,"Oh I know you and I like you." If the eyebrow flash stays a moment longer and is combined with a real smile that goes all the way to the eyes it could signal attraction. He is saying, “I like what I see so I want my eyes to stay open longer to enjoy it.”

• His brows scrunch together and lift in the middle = He’s sad/disappointed
Actually that is not quite accurate. In intense sadness the eyes look down and the and the upper eyelids droop and most importantly only the inner corners of the upper eyebrows go up. So you see the eyebrows raised in the middle of the face above the nose.You can see deep furrows or set of furrows above the nose and you will also see two furrows going out and down from the outer corners of each of the eyes. The unique eye cue that only shows in deep sadness is the raised inner corners of the upper eyebrows. Paul Eckman, the father of facial expression research, shares in his book, Emotions Revealed, that a few actors like Woody Alan and Jim Carrey use that eyebrow cue quite often. I think it makes us feel sorry for them like little lost puppies. Make that Basset hound puppies.

• He closes his eyes for more than a second while speaking = He might be lying – It could mean that, but again you have to note what is happening as he shuts his eyes. We shut our eye when we don’t like what we are seeing. We may close them a bit longer than a normal blink when we hear something we don’t like or when we don’t like or believe what we are saying. (So if they guy closes his eyes in an unnaturally long blink as he says, “I will call you,” don’t wait by the phone. Know a guy may close his eyes a moment longer than normal throughout the entire conversation if he is tired or if he is with someone he doesn’t like or he doesn’t like where the conversation is going.

• His eyes shift down and to the right = He’s experiencing a deep emotion. It is not that simple though you can find some NLP books that say this is true. It is actually more complex than that. If the guy is right handed and he looks down and to the right he may be accessing emotions. Please don’t quote this as down to the right means he experiences deep emotions -- it is not accurate. And eye accessing happens so quickly most people won’t be able to catch it consciously. You could look for another eye cue to see if a man is attracted to you. When someone is looking down with both eyes it can be a signal of submission so if a guy is talking to you and he smiles and looks down with both eyes he may be silently saying, "You are so beautiful I would be dazzled and overwhelmed if I kept looking at you. I bow (with my eyes) to your loveliness." Note that looking down can also indicate that the person is feeling guilty so watch if his eyes go down as he says he is single and available!
Posted by body language lady at 6/18/2009 03:58:00 PM

Gestures and Gender based differences in body language
Men’s gestures are larger, more sweeping and forceful, such as pointing or using a closed fist. Men stroke their chins more, move their legs and feet more, and tap their feet more.
Exclusive to men: stretching hands and cracking knuckles, both feet on the floor with legs apart, legs stretched out, ankles crossed, knees spread apart when sitting
Exclusive to women: hand or hands in lap, tapping, hands or legs crossed at the knees, ankles crossed, knees slightly apart.
Posted by body language lady at 6/18/2009 02:40:00 PM