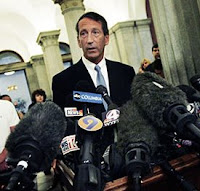 I was asked by a reporter from the Associated Press to read Governor Sanford's body language. He showed lip suppression and tongue thrusts as he talked about his wife standing by him and then later exhibited the following behavior:

I have been unfaithful to my wife. I developed a relationship um with a …um (pressed pulled back lips with frown and upward furrowed brow and eye block) what started out as (head pulled away) as a dear friend from Argentina (head bowed not just down but back) and ummmm it began very (lip pulled back) innocently (showing no it was not innocent) … developed in too much much more.

This body language indicated he was attracted to her from the beginning and especially his paralanguage delivery as he said, "developed into much much more" that he feels deeply for her and continues to feel connected to her. Also his diversion statement, "she is there and I am here," indicated he would like to be with her. When asked, "Did you break off the relationship," he replied, "Obviously not." And he vocally emphasized the not. Sticking the word hard showing he feels strongly about her and has a relationship with her. 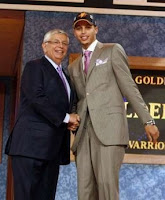 By Tommy Craggs, 4:00 PM on Fri Jun 26 2009
The David Stern handshake View newly drafted player's baptism into the NBA. It is also, often as not, hilariously awkward. We asked body language maven Patti Wood to analyze some of these moments from yesterday's Draft as they shake hands.
Posted by body language lady at 6/26/2009 04:30:00 PM

Michael Jackson, poor man, such a loss of talent

Saturday morning cartoons are on. I am sitting on the shag carpet one foot from the TV screen swaying to the music and singing "ABC, it's as simple as one two three..." along with Michael Jackson and the Jackson Five. We are both 10 years old.
He was always smiling when he performed, always in the zone. Some singers act confident, but Michael Jackson even at five years old was confident. For all of us that copied the dance moves of the moon walk and the Thriller zombies, we will always remember the nonverbal moves of Michael Jackson.
Posted by body language lady at 6/26/2009 04:08:00 PM

"Life is a system of half-truths and lies, of opportunistic, convenient evasion."

For a speaker and coach on body language and deception detection go to www.PattiWood.net and book Patti or buy her book Success Signals.

For information of public seminars Patti is giving on body language and deception detection in Philadeliphia summer of 09 though Paliani consulting please contact us or go directly to the Paliani site.
Posted by body language lady at 6/26/2009 01:42:00 PM

How to Ask Someone to be "Friends" over the Internet

I teach people how to feel comfortable greeting each other. But how do you greet and introduce each other over the Internet? I am on all the social media and find it stressful to respond to someone that emails with a standard request to be a friend or be "linked-in", without providing any information of who they are or how we are connected. I also don’t know the polite way to respond when I have no memory of ever having met them. I want to be kind, and I know as a professional speaker, an audience member is sure I will remember them. I therefore feel rude not linking or "Friending," but if they don't say they were in my audience, I don't know.
So here are my questions for today.
First question: What is the proper etiquette of requesting to "friend" or link?
Second Question: How can you politely ask, “Who are you? and “How do I know you?”
Posted by body language lady at 6/26/2009 12:05:00 PM