For those of you looking for the interrogation videos, I was sent this note:
We will be rolling the clips out every other day for the next three weeks and any student of yours will be able to see the entire catalogue of interrogation clips, probably nine in all, as we make them public. Just direct them and your blog readers to our home page: http://whomurderedrobertwone.com/

What Body Language & Vocal Cues Do You Notice In These Real Interrogations For A Murder Investigation?

As Part of the "Homework" assignment for my Deception Detection class I am sending participants to view the video at the link below of the interrogations of acquitted suspects in a murder investigation.
Here is the story as emailed to me by a group that is investigating the murder.
Patti – I’ve been seeing and reading about you for some time. I’ve been writing on an unsolved DC murder from 2006. No one has been charged with the crime, but three men were just acquitted on charges of cover up and obstruction in a closely-watched trial. We have finally obtained and began posting the police interrogations of the three men from the night of the crime. http://wp.me/pVtne-3SY

In your line of work, is body language reliable in such high pressure and unnatural environments like a police interrogation room? My answer is that stress actually increases the amount of cues given by a suspect.For background and informational purposes, based on your experience, can anything useful be gleaned from such a late night and confrontational interview? Confrontation is not always the best way of conducting an interview. In my workshops I discuss different questioning techniques and their benefits.
There are those who still believe the three defendants are involved in the murder of their friend. Thank you.

PS: For information on our site and citizen investigative efforts over the last 20 months, this recent Washington Post story is a good start:
http://www.washingtonpost.com/wp-dyn/content/article/2010/05/16/AR2010051603220.html 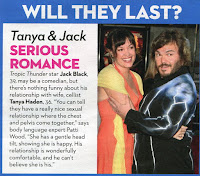 Ok's body language expert, Patti Wood, says you can tell Jack Black and Tanya Haden have a really nice sexual relationship. Check out the link below to find out why she says this.
http://www.scribd.com/doc/34274020/OK-TanyaJack

What Does Pointing Your Finger at Someone Mean? Can Someone Point Their Finger and Lie?

I did a FOX News TV interview with Neil Cavuto concerning finger pointing and lie detection. Here is the transcipt of the TV interview. The actual video is on my website http://www.pattiwood.net/ and is also up on my YouTube channel. http://youtube.com/user/bodylanguageexpert
QUESTION -What does finger pointing mean –
It’s a really potent gesture of power, a symbolic weapon. When you make a fist and thrust your finger you’re symbolically shooting someone.

QUESTION-When you see someone pointing their finger does it mean they are lying. Absolutely not, the average Joe would never do that. In fact, when I teach law enforcement I say it can be a sign someone’s telling the truth because they are passionately defending themselves. (It is very hard for the average person to lie and point their finger in sync with what they are saying.)

But certain ego types do use it. I see it used by powerful men who are use to getting their way and lied successfully in the past. They use it when they are cornered to defend themselves by counter attack. A different version is used by speakers to show conviction of thought. It’s typically not women as there is a sexual component as well.

QUESTION What about Rafael Palmeiro in front of congress in March 2005
Detecting deception in a scripted speech is tricky because you loose the critical spontaneity, but I think he is lying because his timing is off. When you are telling the truth you feel that in your heart, you show it with your gesture then you say it. Feel - Show - Say. He said,"I never," as he slowly raised his finger making it look staged.

Bill Clinton showed four clear deception cues:
1. "I never had" rather than the more natural contraction I didn’t. Liars like to emphasize the not or never
2. His finger is crooked rather than straight showing a lack of his own conviction
3. He is pointing one way and looking another a lack of congruence in his thoughts and actions
4. Depersonalization saying "she" then self correcting to say Monica's name.

George Bush
He uses the political coached version of the gesture to emphasize his conviction. Notice the point is up to heaven rather than out and the cadence with the words.

Nixon
His point goes down and his volume fades out also showing he is lying and lacks conviction in his words.
He doesn’t use it on the, “I’m not a crook” statement he uses it to say "he never made money in office."

Gary Condit
Scary body language! I counted over 40 deception cues in his famous Connie Chung interview. He shows his anger by not only shooting Connie Chung but slicing her in a sword gesture and symbolically strangling her.