I was asked by a journalist today to discuss the importance of first impressions in business. I quoted several studies. In one study, subjects were shown photographs of faces and by selecting those they saw as most attractive and competent actually were the photos of CEOs in higher ranked fortune 500 companies.

Here is the study.
Lasting Impression: Does The Face Of A CEO Determine A Successful Company?
Science Daily (Jan. 14, 2008) — It certainly takes more than a pretty face to run a leading national corporation. But according to a recent Tufts University study, the performance levels of America’s top companies could be related to the first impressions made by their chief executive officers (CEOs).
________________________________________
See Also:
Using photographs of the highest and lowest ranked Fortune 1000 companies’ CEOs, psychologists Nicholas Rule and Nalini Ambady quizzed ordinary college students to determine which of the pictured faces were characteristic of a leader.
Without knowledge of the pictured individuals’ job titles, and by rating the faces on competence, dominance, likeability, facial maturity and trustworthiness, the students were able to distinguish between the successful and the not-so-successful CEOs.
Despite the ambiguity of the images, which were cropped to the face, put into grayscale and standardized in size, ratings of power and leadership related traits from CEOs’ faces were significantly related to company profits.
"These findings suggest that naive judgments may provide more accurate assessments of individuals than well-informed judgments can," wrote the authors. “Our results are particularly striking given the uniformity of the CEOs’ appearances.” The majority of CEOs, who were selected according to their Fortune 1000 ranking, were Caucasian males of similar age.
The study, which appears in the February 2008 issue of Psychological Science, a journal of the Association for Psychological Science, reveals a strong connection between appearances and success as it leaves behind an intriguing question: which came first, the powerful-looking CEO or their successful career?

A Tip From Patti 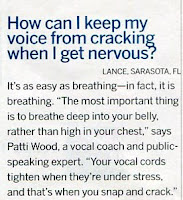 As a vocal coach and public speaking expert, Patti Wood answers a reader's question in Men's Health Magazine. Has your voice ever cracked when you got nervous? Patti explains why and what you can do to avoid it happening. Check the link.
http://www.scribd.com/doc/35167078/Men-s-Health-How-to-Keep-My-Voice-From-Cracking

Patti Wood, MA, Certified Speaking Professional - The Body Language Expert. For more body language insights go to her website at http://pattiwood.net/. Also check out the body language quiz on her YouTube Channel at http://youtube.com/user/bodylanguageexpert.
Posted by body language lady at 8/03/2010 12:01:00 AM