Body language expert weighs in
Is Sandra Bullock traumatized? While many people declared a recent body language expert article to be reaching, there's a lot to be analyzed in Sandra's initial public appearances after her estranged husband's cheating scandal. Do you agree or disagree with the celeb expert?

Sandra was wearing a dark outfit when she ventured outside recently, looking like she was trying to shield herself from the paparazzi.

"She is gripping the coffee cup very high up," Wood said. "That's what you do when you really want to grab hold of something and show your power. She's really making it obvious and playing toward the camera to show that empty finger."

Good for her if she is trying to give us a glimpse of that empty finger! Patti also took a look at Sandra's clothing choice for the outing and said that she picked protective items.

"She's chosen a heavily padded jacket and has it zipped up very high," Wood said. "The choice of her scarf, which is tied over heart, means that she is hiding her heart window and throat window, which is the communication window." The colors, Woods explains, are "protection choices. Black is a protection color."

"She looks like a child who's been traumatized," Wood said. "Her face takes on attributes of a child who's experiencing a deep pain."

Do you believe this kind of analysis, or is it poppycock? I think there is plenty of truth to body language and color choice studies, and it just gets a little embroidered for these purposes.

Politicians' public-friendly stunts
Does it impact their governing?

Last Updated: August 6, 2010 10:00pm
Email StoryPrintSize A A AReport TypoShare with:
FacebookDiggDel.icio.usGoogleStumble UponNewsvineRedditTechnoratiFeed MeYahooSimpySquidooSpurlBlogmarksNetvouzScuttleSitejot+ What are these? .
Federal Liberal leader Michael Ignatieff and his tour bus made a stop at MuchMusic in Toronto. (Michael Peake/QMI Agency) From singalongs to festival jigs, politicians are croonin’ and movin’ to the political beat.

Remember Stephen Harper’s attempted singalong at the National Arts Centre Gala last year? And just last week President Obama made a sit-down appearance on The View, marking the first-ever appearance by a president on a daytime talk show.


According to Patti Wood, these politicians are working hard at increasing their likability factor in order to appear more approachable and connected. “Showing their soft, fluffy, likable side is a way of getting more media coverage.

“It’s a shift from gravitas to gregarious!” adds Wood, body language expert and author of Success Signals. “Politicians seem reconciled that it is difficult, if not impossible, to be credible to gain our trust and respect, so they are singing, dancing, and cracking jokes on talk shows in a bid for media attention that gives them popularity. They are using their charisma to at least be likable.”

Dr. Lillian Glass agrees. “Politicians are so vilified that they’re trying to make themselves appear more human and likable – they’re just building up their image points and leave a better impression for when the mud and dirt start to fling.”

Glass, a body language/communications expert, adds that although their songs and dances are superficial, they will impact how some people vote.

Author Sanjay Burman says that “seeing politicians who can’t dance but shed their insecurities to go out and have fun, makes us see a personable side to them.

“Stephen Harper shaking hands with his youngest son on the first day of school showed us he is just as stiff as we thought.”

And his singing stint was off-key in the warmth department too.

Burman, of burmanbooks.com, says that we love Obama as a person “because he shows us that he is the same as we are. He is intelligent, successful, loving, genuine and fun. He plays basketball, jokes during interviews and always has his family around.

“I have a problem trusting Ignatieff,” adds Burman, a master hypnotherapist and author of "Reading People and Do Everything They Tell You Not To Do."

“His eyebrows are always covering his face. He keeps his distance when shaking hands with people and even when he smiles he keeps a stern look.”

According to Hogan, song and dance are all for show. “They are trying to achieve their 51% and they know that people filter by identity prior to political views. It simply makes good sense to literally touch as many humans as possible. Those people you touch that you can identify, you are much, much more likely to vote for at the polls.”


When it comes to appealing to certain demographics, politicians know exactly where to aim.

Obama is losing support in the unemployed and also the upper income groups, says Hogan. "He's trying to get back "in" with the lower income America by hitting The View. It's a smart strategy on his part - it isn’t going to help a whole lot but it's probably better than not doing the gig!"

-June 2010 issue of the Journal of Nonverbal Behavior

“Attractive candidates get more news coverage than less attractive ones, reports Patti Wood, body language expert. “And it’s more important for a female politician to be attractive if she wants to get media coverage.”

The bottom line: People generally want to be with good looking people – they even value them as being more worthy.
http://www.calgarysun.com/life/2010/08/05/14930736.html


Patti Wood, MA, Certified Speaking Professional - The Body Language Expert. For more body language insights go to her website at http://PattiWood.net. Also check out the body language quiz on her YouTube Channel at http://youtube.com/user/bodylanguageexpert.
Posted by body language lady at 8/07/2010 08:57:00 AM

What Your Desk Says About Your Personality

What your desk says about you. ....A body language experts read.

Well, you can kiss that promotion goodbye -- thanks to that tacky Trailer Park Boys calendar hanging front and centre in your workspace.

Call it career death by décor.

"Put up a suggestive or tasteless calendar and you're looking to be fired. You're a risk-taker who wants to be seen as on the edge -- and you could find yourself pushed off!" says Patti Wood, an Atlanta communications and behaviour expert.

According to Wood, personal items displayed at work convey messages and, like it or not, judgments are made about you based on your taste -- or lack of.

Objects speak loud and clear, says Wood, and often provide clues to an employee's personality and level of commitment.

Toronto image and communications specialist, Roz Usheroff, says workplace accessories "define who you are; they're an extension of your image. Conveying a sense of professionalism is of the utmost importance -- that's if you want to be taken seriously."

She recommends accessorizing with a few "items that define you, like a hobby such as golf or fishing, that allows for small talk and a point of reference -- nothing inappropriate or overdone. You need to show a sense of humour, approachability and warmth."

Adeodata Czink doesn't agree. "Why do you need props? Are you not there to work?" asks Czink, a Toronto etiquette expert and president of Business of Manners.

Check out your workplace style and what it says about you, according to our experts:

Messy! Cluttered but creative, says Usheroff, of The Usheroff Institute in Toronto. "These people can be very innovative types."
According to Wood, a pristine work area may indicate a less approachable type who considers work to be work -- forget the socializing. And don't ask questions; their personal life is just that -- personal. They work well, effectively, efficiently and may have aspirations to move up the corporate ladder. Colleagues socializing and taking personal calls on company time easily annoy them.

Wood also adds that an absence of personal items altogether may indicate lack of permanency -- less to pack when it's time to move on. They may also be secretive; "it could reveal they were fired in past jobs and they don't trust they'll be there long."

Get stuffed. If cutesy figurines, kids' artwork, and a few cuddly stuffed bears adorn the work area, this indicates a warm and fuzzy kind of person who has no problem showing their emotions; self-disclosure comes easily, says Wood. Spending time with friends and family rates high on their priority list.

It's a bird! Superhero action figures or calendar, and goofy, techie toys reveal a good problem solver who's a big kid inside. "They're more left-brain oriented and love to show how smart they are -- if you're in the market for a new TV, computer or camcorder, be sure to seek out their advice," says Wood.

I've got kids! Family photos in very obvious places -- especially at the right of your computer screen -- reveal that family and relationships matter. "It's what make this person happy and it's the most important thing to them," says Wood.


Not necessarily so, adds Czink: "Lots of men put a family picture on their desk or in the room at the window so that others should see what a committed family man he is. I carry my children's picture in my soul, and don't need to have them on my desk."

Sitting pretty. What do you see first -- their back or their face? Sitting with your back to the door indicates you're there to work and don't appreciate interruptions; facing or sitting sideways to the door is a sign of welcome, adds Wood.

"Never close your door," warns Usheroff. "Psychologically, you're putting a wall up; you're signalling you're not approachable."

Patti Wood, MA, Certified Speaking Professional - The Body Language Expert. For more body language insights go to her website at http://PattiWood.net. Also check out the body language quiz on her YouTube Channel at http://youtube.com/user/bodylanguageexpert.
Posted by body language lady at 8/07/2010 08:53:00 AM

The Benefits of Touch 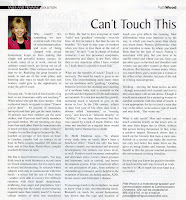 In an article for Lending Success, Patti Wood, motivational speaker and communication trainer, discusses the benefits of touch and what is "safe touch" in the workplace. Check the link for her informative insights.
http://www.scribd.com/doc/34851978/Lending-Success-Can'tTouchThis

Patti Wood, MA, Certified Speaking Professional - The Body Language Expert. For more body language insights go to her website at http://pattiwood.net/. Also check out the body language quiz on her YouTube Channel at http://youtube.com/user/bodylanguageexpert.
Posted by body language lady at 8/07/2010 12:01:00 AM