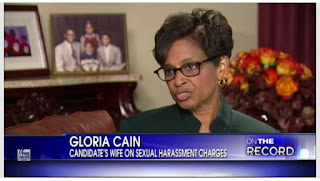 This is my body language read of Mrs. Cain for US News and World Report.

Interviewer, “Let’s start with this.” Mrs. Cain says softly, “Ok!” but is giving a severe lip compression smile. I call this the zipped smile. Women use the zipped smile to cover their emotions, typically to cover anger. Our culture says we as women need to be nice, so we give a zipped smile to cover our anger. She nods her head up and down, but instead of meaning, “I agree” the small quick nods are saying, “Please hurry and get this interview over with.”

When she says, “I don’t know who that person is (eye block) pause misspeak “...and we’ve been married for 42 years.” She shuts her eyes longer than normal blinking in a window shade eye block. That indicates she is uncomfortable with the person (sexual harasser) that the media is projecting.

When she says a moment later “But, they don’t know Herman” her lip pucker quick downward dismissive head shake and stressed voice show her repressed anger at the critical media.

Look how she is sitting at the far end of the couch. The most honest portion of the body is from the waist down. Her lower body and feet are turned away fully from the interviewer. In this moment, though her upper body is angling slightly away from the interviewer in “retreat” and at times even leaning back away. Her arms are out in front and her hands are laying one over the other in her lap (called a blanket hand cross) to protectively cover her pelvis.

As to her husband warning her of the story coming out, she shakes her head. “It is just hearsay” and she gives a tongue drawbridge signifying her desire to get the bad taste of the news out of her mouth and off of her mind.

As Mrs. Cain continues and discusses the warning conversation with her husband and her faint memory (she looks up and struggles to come up with both the true memory of the event and the correct thing to say, true or planned response that may be a lie) of the first woman’s accusations and the Restaurant Association’s charges as being unfounded you see how her body is so turned away from the interviewer she has to twist her neck significantly to answer questions. My read here is she had an agreement in the marriage here that she wouldn’t ask and he wouldn’t tell.
When she responds to the second woman’s allegations, notice how she talks about Herman’s behavior in the PAST TENSE. “That wasn’t a part of Herman’s behavior.

She emphasizes his “Old School Behavior” - her gestures as she talks are in synch. She is telling the truth about his “old school behavior” with her and other women when she is with him.

When she says a moment later, “To hear such graphic allegations….that’s not the person he is.… (as she shakes her head no) he totally respects women.” You can “hear the tears” in her voice. Also look at the change in her hands. She now has a stretched out wrap over her leg protectively. She is feeling under stronger attack here.

Goodness I love the next part of the interview. When she says she was not going to be the wife up on the stage that he knew he would be there by himself. Her voice and nonverbal cues are absolutely in synch. She is being true and honest.

However when she says, “Seriously in my soul, I don’t feel like he’s that type of a person,” I see a pause in her head shaking, I hear awkward pausing and leaving out the IS in a slight grammatical error.This cluster of cues and even the wording she chooses sound less sure of herself. When someone is unsure they may leave out the strong words that make their message more definitive. We want her to say, I know he didn’t do these things but she keeps talking about the man she knew or knows not being that kind of person instead of speaking to his actual behavior.

As she is asked about her family’s reaction, Mrs. Cain kicks out her foot to show their anger, and sure enough says, “My daughter was angry…”

“NO I am not missing anything, I know Herman” she gulps showing she is keeping something in seems like she is gulping down her fear that she doesn’t know everything.

Again at the very end “SOME of the things that you are saying about him, that is not Herman.”