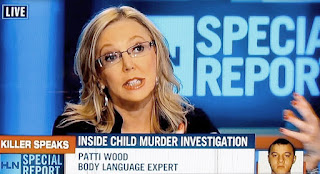 Patti shared her insights with Vinnie Politan on HLN Special Report Monday regarding the body language of Ryan Brunn while he was being interrogated for the murder of Jorely Rivera. Check the link below for details!


Patti's notes on the video:
• Overall notice how he consistently repeats back the interrogator’s words to say no rather than use his own wording to deny. When you are keeping information in, when you are lying an easy way to respond is to repeat back the question as a statement.
• Ryan gives a very subtle mouth tense at 1:42 When Interrogator says, “You haven’t told me everything.” That indicates a hot spot, he is keeping something in.
• When interrogator says “One did you participate?…” Ryan’s breathing changes from his baseline to high up in his chest you can see the rise and fall change at 1:59.
• “That tells me that there was some involvement.” Ryan does a half head shake no. Notice that he does not fully shake his head no. Nor does he interrupt and say no as an innocent person would.
• He checks his phone twice around the Pot questions. I can share why he did that, how it affects the brain and the timing.
• “I am not holding nothing back. I promise you.” He nods no, that head shake seems to align with what he is saying. But notice how he keeps shaking his head this time more quickly and more forcefully shaking no when he says he will retake the polygraph and keeps shaking his head no through the next statement.
• “You said nothing happened in Virginia.
• Caught in the lie about where there were any accusations made 3:07 his breathing becomes fast and again goes high in the chest and his voice goes up. He knows he is caught.
• When interrogator having caught him in the lie about charges in Virginia says, “You see the pattern building up. You can see that when I run the polygraph on you.” Ryan clearly shows he is caught. By his response to that at 5:31 his head goes to the side as if he has been punched and his mouth puckers up with the sourness of feeling caught and then Ryan does a tongue cleanse and licks his lips to get that bad taste of being caught out of his mouth.
I
‘Interrogator says, “Is Ryan a bad person. Is Ryan holding back something?” Ryan jerks back then brushes his hand out weapon like and says, “Has anyone ever said you touched them?” Ryan’s pulls in his lips showing he is keeping the truth about that statement in. I didn’t do nothing to that little Spanish girl and I didn’t do nothing. Look at the gesture smacking down what was just said, smacking down the statement trying to make it go away.


Patti Wood, MA, Certified Speaking Professional - The Body Language Expert. For more body language insights go to her website at http://PattiWood.net. Also check out the body language quiz on her YouTube Channel at http://youtube.com/user/bodylanguageexpert.
Posted by body language lady at 1/31/2012 10:58:00 AM