My 11 month old niece Ava recently got a little Karaoke machine with a plastic microphone. Ava has enjoyed singing – well sort of singing – well let’s say she enjoys putting the entire microphone into her mouth and babbling. This new research study shows a relationship between which side of a baby’s mouth moves first when babbling (the right) and the link to the language centers of the left hemisphere. 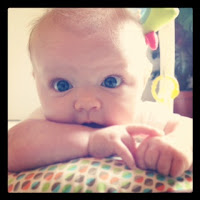 Just a few minutes around a newborn is enough to get anyone babbling like, well, a baby. But just what drives an infant's babbles remains a matter of much debate. Some scientists posit that the sounds result from a baby's attempts to gain control over his mouth, tongue and lips and, therefore, are not related to language. A second hypothesis holds that babbling instead represents a key step on the way to speaking real words. New research published today in the journal Science further supports the latter theory--scientists say they have linked baby babbling to the brain's language-center.


By studying videotapes of 10 babies between the ages of five and 12 months, Laura Ann Petitto of Dartmouth College and Siobhan Holowka of McGill University examined the degree of symmetry between the right and left sides of each baby's mouth. The brain's language center is located in the left side of the brain, which controls the right side of the body. As a result, in adults, the right side of a speaker's mouth tends to open slightly wider than the left (although the difference is imperceptible in everyday conversation). The scientists found that when babies babbled, their mouths opened more on the right-hand side. A nonbabble noise (such as the sound "ahh") resulted in a symmetrical open mouth and a smile caused the left-hand side to open wider. "This discovery is the first to demonstrate left hemisphere cerebral specialization for babies' production of language, just like we see in adults," Petitto says. "This suggests that language functions specialize in the brain at a very early age." She is currently investigating whether the findings could help develop diagnostic tools to determine--even before a baby has uttered his first 'real' word--if he may encounter linguistic problems in the future. "The sooner parents and pediatricians recognize these problems," she says, "the sooner they can begin to treat them."

Patti Wood, MA, Certified Speaking Professional - The Body Language Expert. For more body language insights go to her website at www.PattiWood.net. Check out Patti's website for her new book "SNAP, Making the Most of First Impressions, Body Language and Charisma" at www.snapfirstimpressions.com. Also check out Patti's YouTube channel at http://youtube.com/user/bodylanguageexpert.
Posted by body language lady at 2/19/2013 09:30:00 AM