Many of you know that I have been researching the relationship between body language and the DISC personality assessment for many years. After reading about movement analysis being used to determine Putin’s decision making style I have been looking at some of the newest research in personality and nonverbal communication. Here is a great article on some of the research. I have several other articles if you search on my blog for personality or DISC or gestures and speakers.
Note the yellow highlighted information. The following article was posted on http://postnihilism.blogspot.com/2011/07/can-body-language-indicate-personality.html 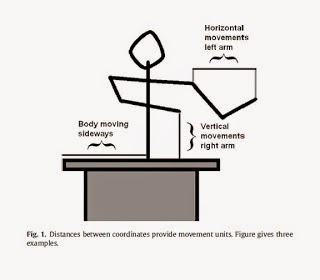 In my previous discussion paper, “The Tarot as a Source of Ancient Personality Theory”, one of the more interesting findings was that some characteristics of the court cards, which are believed to represent people in your life, had to do with the way people move, such as ‘graceful’, ‘swift’, ‘acute’, ‘slow’ and ‘clumsy’. As a result this researcher was lead to question whether personality may actually be indicated in how a person moves and carries themselves. However, current personality theory does not associate traits with physical movement within any of the Five Factor Model of personality characteristics. Even though people tend to use their first impressions about a person to make quick judgments regarding personality, surprisingly little research is available to further our understanding of how exactly this might work. In this paper we will examine whether any current research on body language could lend itself to personality theory and expand present knowledge in this area.

An interesting tool recently used in assessment of personality and body language is Laban Movement Analysis. Created by Rudolf Laban to describe interpret and document human movement for dancers, actors, athletes and health professionals, LMA is also being incorporated by psychologists into these theories by correlating movements with emotional state and personality variables (Levy & Duke, 2003). LMA also takes a gender based approach, finding subtle differences in the expression of particular emotions between males and females. For example, in males anxiety may be expressed by increased use of shrinking movements while dominance, achievement and exhibitionism is expressed by decreased use of enclosing movements. Females, in contrast, expressed anxiety by a decreased tendency to change back and fourth between efforts and lack of emphasis in effort, as well as decreased sagittal movements. Dominance and exhibition is expressed by a decreased use of spreading movements. This indicates that there may be some subtle gender based difference in emotional expression in body language.

Another study examined whether body language could be linked to desire for control. In a study more than 700 participants were asked to sit and stand in a variety of positions (Rhoads, 2002). In addition, the same subjects completed need for control tests and the results were correlated. Results indicated that people who crossed their arms with the right arm in the dominant position, with the right shoulder elevated, as well as which side they favor when they stand or sit was positively correlated with desire for control. Highly controlling people are associated with characteristics in the low agreeableness trait.

A very informative study covers a much more holistic view of personality assessment based on body language. Politicians giving speeches were transformed into animated stick figures and shown to subjects, who rated the five personality factors of the figure based on gestures (Koppensteiner & Grammer, 2010). Overall subjects were found to be very adept at associating meaning to gestures and movements. Stick figures with more low arm gesture activity interrupted with smaller periods of high activity were regarded as more agreeable than stick figures with overall high activity. High extraversion was associated with high overall activity and only brief low activity periods. Stick figures with greater head movements were considered less conscientious, more neurotic and less open compared to stick figures with head movements with less amplitude. High openness was associated with pronounced changes in movement direction, and round movements were considered linked to less openness. Making smooth transitions in movement from one activity peak to the next was associated with low neuroticism, whereas high neuroticism was linked to sudden changes in gestures and making these changes more often. Although further study is required to confirm if these traits are consistent, it gives us considerable insight integrating particular movement patterns with trait theory.

Overall we can start to see connections between body language and personality. High extraversion seems to be connected to more movement, broader, sweeping movements and increased saggital movement. High neuroticism could be seen in shrinking, enclosing movements, decreased saggital movement, more head movement and more sudden, jerky movement. Openness may be linked with more profound changes in movement direction, and conscientiousness with less head movements. Agreeableness may be linked to low periods of activity with short periodic bursts of high activity, as well as displaying more submissive body language such as crossing arms with the left arm dominant as well as sitting and standing with the left shoulder favored relative to the right.

Going back to the original traits under consideration we could see swiftness as a trait of high extraversion and slowness associated with low extraversion. Graceful gestures could indicate a smoothness of movement linked to low neuroticism. Finally, acute movement could also indicate increased confidence, and hence low neuroticism, or it may indicate high neuroticism if gestures are sharp and change frequently. It is surprising this has not been an area of more intense research, since the research that has been done would seem to indicate that this method of personality assessment is constantly employed by nearly everyone, and deserves to be better understood.

References
Koppensteiner, M. & Grammer, K. 2010. Motion patterns in political speech and their influence on personality. Journal of Research in Personality, 44, 374-379.
Levy, J. A. & Duke, M. P. 2003. The use of Laban Movement Analysis in the study of personality, emotional state and movement style: An exploratory investigation of the veridicality of “body language”. Individual Differences Research, 1, 39-63.
Rhoads, S. A. 2002. Using body language as a measurement of the personality trait of desire for control. Dissertation Abstracts International: Section B: The Sciences and Engineering, 63, 2996
Posted by Tesla Death Ray at 10:17 PM


Patti Wood, MA, Certified Speaking Professional - The Body Language Expert. For more body language insights go to her website at www.PattiWood.net. Check out Patti's website for her new book "SNAP, Making the Most of First Impressions, Body Language and Charisma" at www.snapfirstimpressions.com. Also check out Patti's YouTube channel at http://youtube.com/user/bodylanguageexpert.
Posted by body language lady at 8/25/2014 09:54:00 AM