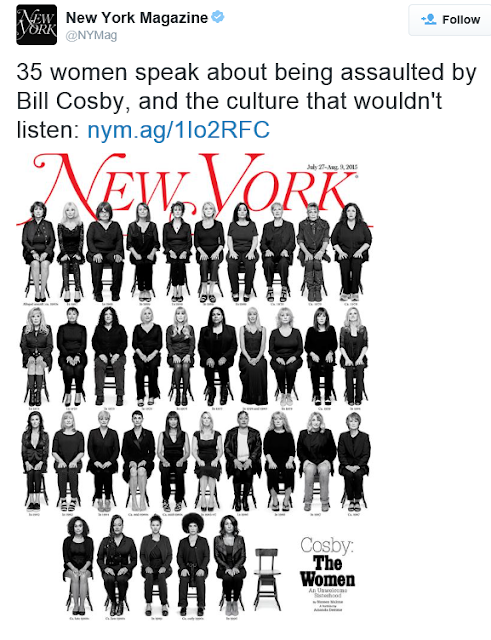 The cover story of this week's New York magazine is getting a lot of attention.
It features 35 women seated in chairs and one empty chair. The women are all dressed in black, looking straight ahead with both hands resting on their knees. It is a stark image, and all the more compelling because each of them is openly and by name accusing Bill Cosby of horrendous acts. Some say they were drugged and raped; others recount stories of narrowly escaping sexual assault.
But what has really hit a nerve is the empty chair in the photo. The chair has sparked a powerful conversation online, including a viral hashtag #TheEmptyChair.

NPR's Renee Montagne spoke to Hanna Rosin, author of The End of Men: And The Rise of Women, about the significance of the hashtag and how it's shedding light on a movement of people speaking publicly and frankly about experiences with sexual assault.

On the symbolism of the empty chair
It serves so many purposes. First, it's a rebuke, like a classic rebuke. You know, here ... history, America, the patriarchy, whatever you want to call it, has made it difficult for women to speak their truth. So there's a chair that represents silence, something that didn't happen. It's also the opposite of that, which is an invitation, you know: "Come sit in this chair." ... Social media, the hashtag "EmptyChair" basically is saying, "All of you, it's time to speak up now. Walk up to this chair, sit down like the rest of us. There's a sisterhood here, waiting to greet you and share your stories."
On the visual effect of the cover
This is technically a story about Bill Cosby, but when you look at the cover, visually it transmits something different. There are women of all ages, ranging from 40 to 80; there are women of all races on this cover. There are women of all visual styles; they're all wearing black, but they're not wearing the same dress. ... So what this is saying is assault can happen to anyone. Here's a historical archive, not just of Bill Cosby's actions, but of women who have been assaulted generally.
On what struck her about the hashtag
I guess what struck me is the phenomenon that you can trace people's stories back to them. You know, Twitter is completely public. This is not a private forum for women to gather together. This is not one woman sort of clearing her throat and bravely coming forward. This is people under their own names, under their Twitter handles, saying this happened to me or a version of this happened to me or even just cheering the women on.
On whether #TheEmptyChair moment will last
I think this moment is going to last. ... [It] is unresolved and very interesting and, right now, intention. I'm not talking about the Bill Cosby story anymore. ... The way this story has come out, apart from the Cosby story, is sexual assault on campus. And right now I think you have this moment where woman feel simultaneously very vulnerable. ... There's been so much news about sexual assault on campus. That's a story that really has invigorated the feminist movement in the last couple of years. On the other hand, women also feel empowered. ... The best example of this is Emma Sulkowitz, a recent graduate of Columbia University. ... She wants people to pay attention to her abuse. ... She's also owning her abuse, turning it into art, really identifying herself with it and using it to make a statement.
On how #TheEmptyChair connects to issues of sexual assault on campus
The cover and the empty chair tie this whole story together. Because the cover is historical — you see that the women are a bit older. And then the empty chair ties into social media — that taps into the sexual assault on campus movement. So you've got ... a kind of feminist history put together from beginning to right now.