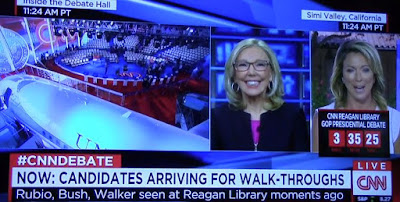 Power is communicated by the amount of space you take, whether your body is open rather than closed and relaxed rather than tense.

Donald Trump finger points and chops in weapon like gestures, scowls and grimaces and yells a lot. This combined with his BIG hair, big head and jaw and height make his imprint as the aggressive alpha male candidate.  In addition, he has a low, growly voice.  In the analysis of the Debates from the past hundred years the candidate with the lowest voice won. Lower tones in the voice are formed by a larger larynx. Trump is the lion roaring and that can win over a “nice” candidate. Anger can “trump” nice.

Other candidates in the first Republican debates:

Jeb Bush kept his shoulders down and his arms tight to his body.  He looked scared. In many speaking situations he gives an unfortunate puppy head tilt at the beginning of his answers to questions. In the last debate he also did an “I give up shrugs” and spoke at a low volume and gave halting, and half-finished utterance.   His body swayed to give himself comfort rocking motion and head tilts. He needs to be stronger and more forceful and gesture more broadly.

Ben Carson has beautiful words but he was not forceful enough in this first debate! Several times he held his arms out with his palms facing upwards in a gesture cluster I call Holy supplication. This makes him look submissive rather than presidential. He should gesture more forcefully and forward.  He is open and likable and when he smiles he is charming but so far he is not quite alpha enough in debate mode. Open and likable are admirable characteristics but he needs to look more in control to win viewer’s confidence.  The biggest issue in the first debate is that he holds his head back in and down so he looked like a turtle fearfully hiding his head. He also gulped down his words, and let his voice trail off at the end of sentences. He also held his own hands. He has a great sense of humor and he can be spontaneous so he has a chance to win viewers over if he works on his power.

Carly Florina has the chance to have a fresh new image. She has a nice, low voice. Slow and deliberate. Margaret Thatcher trained her voice to go low when she gave serious messages. Carly has a great deliberate and low presidential voice. Even if you don't agree with her message her delivery is that of a leader. When she speaks and says things like. “This is a great nation” her gestures are small, but lady like. The best thing about her gestures is that they are in sync. They are authentically given in what body language and credibility detection reads call a “feel show say” order. She feels something and gestures from her limbic brain and then says the words from her neocortex. That feel show say delivery indicates she truly believes what she says. We hear and see that and we believe her. In fact, her head even moves in sync. She communicates anger well and rehearsed messages well. We need to see her being spontaneous and giving inspiring messages.

Chris Christie is folksy and relaxed but gets defensive easily. Anger does not look good on him.