On Friendship
By:  Kahlil Gibran

Your friend is your needs answered.
He is your field which you sow with love and reap with thanksgiving.
And he is your board and your fireside.
For you come to him with your hunger, and you seek him for peace.
When your friend speaks his mind you fear not the "nay" in your own mind, nor do you withhold the "ay."
And when he is silent your heart ceases not to listen to his heart;
For without words, in friendship, all thoughts, all desires, all expectations are born and shared, with joy that is unacclaimed.
When you part from your friend, you grieve not;
For that which you love most in him may be clearer in his absence, as the mountain to the climber is clearer from the plain.
And let there be no purpose in friendship save the deepening of the spirit.
For love that seeks aught but the disclosure of its own mystery is not love but a net cast forth: and only the unprofitable is caught.
And let your best be for your friend.
If he must know the ebb of your tide, let him know its flood also.
For what is your friend that you should seek him with hours to kill?
Seek him always with hours to live.
For it is his to fill your need, but not your emptiness.
And in the sweetness of friendship let there be laughter, and sharing of pleasures.
For in the dew of little things the heart finds its morning and is refreshed.

Mr. “Get it Right” (Corrector) Helps Me go to the Grand Canyon

Mr. “Get it Right” (Corrector) Helps Me go to the Grand Canyon
By:  Patti Wood MA, CSP

I’ve known my friend Michael for a long time.  In fact, I have known him since he was a 19-year-old student of mine years ago at Florida State. Now don't go there, we have always been just friends. I was not Mrs. Robinson. (Though I could rock those black stockings!) I was only three years older than Michael when he was my student and it took him two years to stop calling Miss Wood!

Now Michael is a "Get it Right" with a little "Get Along" thrown in. He wants to help you by pointing out all the details and problems you have not seen in any situation.  He said with news anchorman sincerity “Now Patti, it’s going to be really cold in the Grand Canyon in November have you thought about the fact it could snow?”  I exclaimed, “Oh wouldn’t that be great!  "I could see the Grand Canyon covered in snow!" Michael tisked tisked as he observed another “problem” I hadn’t considered. “Now Patti I know you lived in Florida most of your life where it is always warm.” “Do you have the clothes that will keep you warm enough for snow and cold weather in the Grand Canyon? “ I replied, “Oh I don’t, but that’s great I can buy a cool coat and set of furry boots.” I said filled with glee, “It will be great to go shopping for snowy cold weather.” Michael’s voice became even more fatherly in its sternness, “Now Patti I know you’re paying off your grad school loan and expanding your business.”  “Do you have the money to buy all these clothes?  I heard his stern concern and started laughing because I realized he was being helpful with the details as a “Get it Right” on the DISC personality inventory and I was being a “Get Appreciated” cockeyed optimist, someone to whom details are not as important as the big picture possibility of it all.  Michael heard me laughing and he got it. He said, “Oh, I’m being really “Get it Right” about your trip aren’t I? “Should I be a little “Get it Appreciated” for you?” I said, "I love all your advice and yes, optimism would be awesome.” There was a long pause because “Get it Rights” need silence to think of just the right thing to say, and then he said, “Isn’t it GREAT that you’re going to the Grand Canyon in November.” and we both laughed.  I appreciate Michael’s ability to see the details; he loves my joy and positive outlook. When you are dealing with different DISC personality types sometimes you just need to love what they bring you and sometimes you need to ask for what you need.

Classic Movie Moments from The Graduate 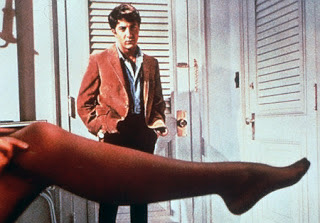 Mrs Robinson was confident and she knew how to rock black stockings. Here are a few classic movie moments from The Graduate.