Inside Edition Link to the interview with Donald Trump:
http://www.insideedition.com/headlines/15586-after-uproar-donald-trump-dials-back-remark-about-punishment-for-women-who-have-abortions 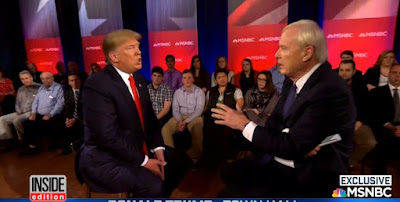 The most interesting nonverbal aspect of Trumps interview is how he says, "They should be punished." If you look at that statement it is mighty, but his nonverbal delivery was soft and he retreated or froze in place each time he said, it. It is obvious that is not what he believes but, he was couriered into saying it and boy does it make a great headline!

Trump is sitting with his legs spread in what would normally be a power pose, but there is a mismatch to that power pose as he is sitting slightly stooped.

Trump typically has up gestures that are a very forceful weapon and weapon like. He typically holds his hands away from his body but, in this interview he is more still and frozen in fear as he is being questioned about abortion and he keeps his hands over his pelvis in the fig leaf protective position. Being still and protected very unusual for him. He really didn't want to answer it.

Though at the beginning on the clip as the women is questioning him, he is slightly less stressed, but when he is later questioned by the interviewer, he looks flummoxed. He is looking off a lot to his right to come up with answers. Typically he looks at anyone who questions aggressively starring at them with his head forward so again, this in unusual for him and shows his high stress level.

He gives an eye shutter showing his stress as he responds to the question about punishing women who have abortions, “...it’s a problem we have to decide on." Also notice that though the answer is evasive he is still shuttering.

Trump moves from a protective fig leaf hand position over his pelvis to a downward steeple. This shows he is trying to get the power back that he has lost stumbling through the abortion punishment questions. As he repeats the evasive answer, "It's a problem we have to deal with" and talks about, "… some form of punishment."

Trump returns to his natural baseline of aggressive gesturing only when he tries to question the interviewer about his catholic faith. Trump gets so much power when attacking!


But near the end of the interview he is cornered. Notice how he pushes out air in stress as he says "it's yet to be determined.” Trump also averts eye contact.

Patti Wood, MA, Certified Speaking Professional - The Body Language Expert. For more body language insights go to her website at www.PattiWood.net. Check out Patti's website for her new book "SNAP, Making the Most of First Impressions, Body Language and Charisma" at www.snapfirstimpressions.com. Also check out Patti's YouTube channel at http://youtube.com/user/bodylanguageexpert.
Posted by body language lady at 4/01/2016 11:06:00 AM