What You Can Say To Stop A Bully

Notice that you don’t call anyone a bully in any of these options. Do not label or name call, ask instead for what you want.

Five Tips for Getting Your Children Involved in Politics

Here are five tips I would suggest to get your children involved in politics.

First have them listen to and watch and read the platforms and voting habits of their senators, congressman  and women and the political candidates and talk to them about what they see and notice.
For example, recently children have seen politician being bully’.  If they are young you can have them imagine a child on the playground saying those things and acting in a particular manner and ask them how they would feel and what that shows about the politicians. ( How would you feel? How would you feel if someone said those things about you?)  Watch the debates with your children and have them count and point out the good strong comments and ideas and the attacks and jabs. Have them express what they like and don’t like. Stop the recording and talk about what you have seen and ask them their feeling and state yours!

Second, have them take public speaking and debate classes and enter speech competitions. This will build their confidence and give them a skills that will benefit them the rest of the their lives. The more they speak the better they will be.

Have them take classes on interpersonal skills, logic, and negotiations  and teach them how to make friends, form alliances, network, small talk, connect to others and be nice.

Teach them how to meet greet shake hands and make a stranger feel at ease. I have conducted several years of research on first impressions and greeting behavior this is also a set of skills that will serve them well.

Finally I suggest that you see if they would like to volunteer to work on a campaign or assist in the office of a politician. I was a volunteer for a Florida state senator when I was in grad school. I learned so much. One of the things I realized is that my senator was only working three days a week and rarely was present for votes. That guided me to look at voting records of candidates and be very aware of the work ethic of the people I voted for!


Patti Wood, MA, Certified Speaking Professional - The Body Language Expert. For more body language insights go to her website at www.PattiWood.net. Check out Patti's website for her new book "SNAP, Making the Most of First Impressions, Body Language and Charisma" at www.snapfirstimpressions.com. Also check out Patti's YouTube channel at http://youtube.com/user/bodylanguageexpert.
Posted by body language lady at 4/22/2016 11:30:00 AM

First Impressions, Handshakes Are Key To Women In Leadership

Below is an article in NEWSOK.com highlighting Patti's recent program for Meinders School of Business in Oklahoma City.

First impressions, handshakes are key to women in leadership 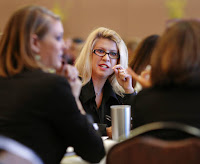 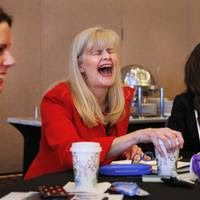 By:Paula Burkes | April 20, 2016
Attention businesswomen: Want to be more successful in the workplace? Don't worry so much, and master the perfect handshake. Such was the advice of presenters at a women's leadership conference on Wednesday that drew 310 attendees to the Cox Convention Center. Oklahoma City University's Meinders School of Business hosted the seventh annual event, which was presented by the Chickasaw Nation.
Nancy Parsons, CEO of Tulsa-founded and now Texas-based CDR Assessment Group, said studies show men and women are basically equal in leadership energy, calmness and emotions.
“But under pressure, men dominate and women tend to move away and not speak up,” she said.

Her company offers coaching tools that, along with leadership characteristics, measure inherent negative risk factors, including rule breaking, egotism and upstaging, which all are more common to men but — perception-wise — more detrimental to women, Parsons said.
For example, a male rule breaker is seen as a change agent, while a female rule breaker is viewed as inconsistent, she said. Meanwhile, an egotistical male is perceived as overconfident, while an egotistical female frequently is called the b word.
“We're taking ourselves out of the running for fear of failure,” Parsons said. “We women often work harder, putting in 80 hours, but we're not being noticed because we're not speaking up,” she said, noting worrying is seen as a lack of courage, and companies want leaders with courage.
Atlanta-based body language expert Patti Wood said first impressions on credibility, likability, attraction and power are made within the first second of meeting someone, and take up to six months of face-to-face interaction to change.
Because women want to be perceived as equals, they always should extend their hands for handshakes, Wood said.
When someone approaches, people should raise their eyebrows to show an openness, which causes approachers to be open, Wood said. “Then scoop in, with your hand tilted down, so you get a palm-to-palm firm grip, versus someone grabbing the end of your fingers in a wimpy handshake,” she said.
To compensate for bone-crusher handshakes: “Use your free hand to encompass the shake, and send the symbolic message, ‘You're surrounded,' ” she said.
For shakers who won't let go: “Lean in over your right foot, to discombobulate them so they'll loosen their grip and you can splay your fingers and break down and away.”
Other conference highlights include:
•Jaynie Studenmund, a public company board member of LifeLock, Pinnacle Entertainment and Core Logic, and former southern California banking and Internet executive, said colleagues always trump products.
“An A group of people can turn a B product into an A product,” she said. Also, “keep walking cash, so you're not emboldened to a particular job because of what it pays” and “Take jobs or board positions to get out of your comfort zone.”
•Brian Uzzi, a professor of the Kellogg School of Management at Northwestern University, said networking is not about having lunch, but sharing sports, nonprofit, community service and other activities with something at stake, such as a record to break.
“Through shared activities, we build trust with a diverse group of people who see our true colors,” Uzzi said.
Bill Gates' big break came through his mom's service with an IBM executive on a United Way board, he said. When IBM opened up its desktop publishing division, it — at the suggestion of Gates' mom, Mary Gates — opened proposals to smaller companies and Microsoft won the exclusive licensing agreement.


Patti Wood, MA, Certified Speaking Professional - The Body Language Expert. For more body language insights go to her website at www.PattiWood.net. Check out Patti's website for her new book "SNAP, Making the Most of First Impressions, Body Language and Charisma" at www.snapfirstimpressions.com. Also check out Patti's YouTube channel at http://youtube.com/user/bodylanguageexpert.
Posted by body language lady at 4/22/2016 10:15:00 AM