Rihanna and Drake’s body language prove they have mutual feelings for each other, expert says: ‘He is just absolutely smitten’

Rihanna and Drake’s body language prove they have mutual feelings for each other, expert says: ‘He is just absolutely smitten’ 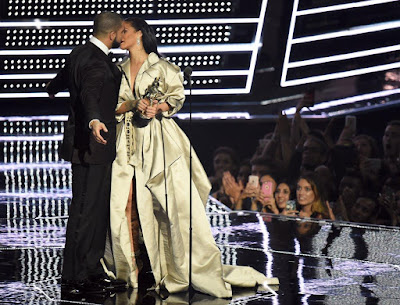 Sure Drake could have kissed Rihanna better, but there's no denying they've found love.

The rapper's awkward smooch with the "Kiss It Better" singer at Sunday night’s VMAs left some fans confused about their relationship status after he declared his love for her. But their mutual feelings for each other are in plain view — according to a body language expert.

"He is just absolutely smitten. He's like a little boy," said Patti Wood, an Atlanta-based specialist who has authored multiple books on the subject.

Wood said Drake's infatuation with the 28-year-old star was evident not only in the way he swayed back and forth during the speech — a clear sign of light nervousness — but also in how he delivered it.

"It was so adorable. He had really practiced that speech," Wood said. "It wasn't just words to him. He had a vocal emphasis on certain words, he knew when to pause, so what he was saying was meaningful to him."

"There was vocal variation that showed he's putting his emotions and his meaning it," she continued, adding that Drake also kept his eyes on RiRi throughout to prove he meant business. "He really felt what he was saying."

The most shocking moment of Drake's four minute speech came near the end, when he professed, "She’s someone I’ve been in love with since I was 22 years old."

"Her shoulders rise, and she laughs, and there's a big smile on her face as he says it," she said. "That's a very nice welcoming of it, kind of the joy of it."

Rihanna served up several particularly telling signs that indicated she was swooning after Drake's speech, as she looked back at him multiple times and raised up her chest after he handed her the award and faded into the background.

"That's happiness," Wood said of Rihanna's body movements. "That up motion of her chest and the look back is happiness. That affirms … (her prior behavior) was nervousness and anxiousness. She accepted what he said."

Drake and Rihanna have been linked together for months, but neither had commented on the swirling speculation before the rapper's apparent admission of love on Sunday.

Hours after the award show, he shared an Instagram selfie of him kissing Rihanna on the head, once again celebrating the pop star for taking home the Video Vanguard honors.

So forget about the awkward kiss, maybe Rihanna just didn't want to ruin her makeup. Or perhaps she hates a P.D.A.

Patti Wood, MA, Certified Speaking Professional - The Body Language Expert. For more body language insights go to her website at www.PattiWood.net. Check out Patti's website for her new book "SNAP, Making the Most of First Impressions, Body Language and Charisma" at www.snapfirstimpressions.com.