What made Arnold Palmer the King of Charisma - Insights from Patti Wood, Body Language Expert

What made Arnold Palmer the
King of Charisma

USA TODAY Sports' Lorenzo Reyes was on hand during what was an emotional day as family and friends of Arnold Palmer gathered to celebrate the late golfer's life. USA TODAY Sports 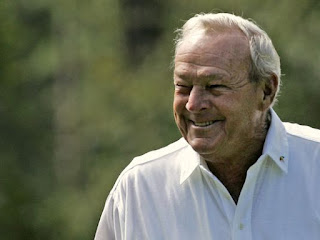 Thousands of people are expected to gather Tuesday in Latrobe, Pa., for a memorial service honoring the Arnold Palmer, known as "The King" of golf but also considered a king of something else —charisma.
Two experts on the subject explained for USA TODAY Sports what made Palmer so charismatic and, in turn, made people so fond of the legendary golfer who died Sept. 25 at the age of 87.
Countless photos show Palmer flashing his signature smile — open mouthed and revealing his front teeth, noted Patti Wood, an expert in body language and nonverbal communication.
“Most boys stop doing that at the age of 5 unless they’re very joyful,’’ said Wood, author of SNAP: Making the Most of First Impressions, Body Language and Charisma. “But he gave that smile all the time. And the crinkles around the eyes showed a sincere, real smile. You just see it over and over and over again."
The smile is encompassed in what Wood cites as charisma’s three categories — likability, attractiveness and power. Likability also includes laugh, and Wood said Palmer had a world-class laugh.
“His jaw would drop down, so he had a large, open mouth,’’ Wood said. “And the sound of his laugh was deep and just very warm and strong at the same time."
Palmer’s attractiveness, well, Wood suggested that requires little expert research.
“Blond and gorgeous,’’ she said. “Handsome and well dressed. He just had some of those classic characteristics of Adonis-like attractiveness.’’
Jennifer Withelm, an international speaker on charisma, said that Palmer wasn’t perfect and neither was his swing. More importantly, she said, he had great integrity.
“He played golf raw, ferocious and unorthodox and was an enormously good golfer nevertheless,’’ Withelm wrote it an email. “Palmer had rough edges and was a great role model for a charismatic person. You don’t have to be perfect. You just have to be full of integrity.’’
Controlled emotions also bolstered Palmer’s charisma, according to Withelm.
“Yes, Palmer showed emotions,’’ she said. “But he was always aware of his emotions, even when he lost. No uncontrolled fits of rages, just pure confidence in his ability to win.
“But Palmer was not always perfect in this personality characteristic. There were times in the 1960s where he wanted to win too badly and lost because he became a high flyer. Over time he got better in tranquility.’’
The rise of TV also captured Palmer’s extroverted ways, evidenced by his interaction with fellow players and fans, and that reflected his charisma, according to Withelm.
“Charisma is a relational phenomenon,’’ she said. “It’s no use to sit in your closet all alone and say: ‘Wow, I am charismatic!’ ” No one will see it.’’
Link to USA Today article: http://www.usatoday.com/story/sports/golf/pga/2016/10/04/arnold-palmer-king-charisma/91501472/

Patti Wood, MA,  The Body Language Expert. For more body language insights go to her website at www.PattiWood.net. Check out Patti's website for her new book "SNAP, Making the Most of First Impressions, Body Language and Charisma" at www.snapfirstimpressions.com.

The Proper Way to Apologize To Friends, Family, Co-workers and Customers

The Proper Way to Apologize
To Friends, Family, Co-workers and Customers
By Wood Professional Speaker and Trainer

We all make mistakes. Often when we have made a mistake we feel uncomfortable dealing with it.  You first need to clarify in your mind what went wrong. Was it a simple error? Did you not realize it at the time, or did you know and hope you would not get caught? Is it something you feel bad about? Is it something that is likely to occur again? And think about its effect. Was it no big deal shoulder shrugs for the person or was it a heartbreaking mistake. You can't apologize effectively if you don't know what you are apologizing for?  When you examine the mistake follow these rules step-by-step for an apology that takes the pain out of the process for you and lightens the pain of the offended party. The best way to apologize is face-to-face with the person but you can use some of these steps to form an apology letter as well.

Step One - Communicate your apology as soon as possible. Waiting to let some time pass is a great strategy when you’re a gardener waiting for your seeds to grow, but delay allows weeds to grow larger in a garden and bad situations to grow worse in our relationships. Dissonance makes people uncomfortable, so your friend who is upset with you taking a phone call during your lunch, or a customer upset that they waited too long will not remember the good behavior they will emphasize the bad and research shows it will actually grow in severity in their minds.

Step Two -Let go of your desire to win, be right, or make excuses. The Myers Briggs Personality test say there are two types of arguers, Thinkers who think the most important thing in the world is to be right and Feelers who feel it is the most important thing in the world to be liked. If you’re the “I want to be liked” person you may avoid apologizing to save embarrassment or hurting feelings. If you’re the “I am always right” person most of the time it’s not about winning or losing, it is about keeping and or maintaining a relationship.

Step Four - Keep the message clear of “buts” and excuses. In order to sound professional you must keep your message clear and free of the “buts” So don’t say, “I’m sorry, but I had to take that phone call it was really important.”  Stay clear of the blame game. “I am sorry, but it’s not really my fault, my boss…”  You might think, “But sometimes it’s not my fault.”  It doesn’t matter who’s to blame; apologize anyway without giving an excuse. If you’re apologizing to a customer you know you are a representative of your company and therefore you have a responsibility to see that things go well. In all your relationships your willingness to be accountable will insure that you are seen as a responsible, mature individual.  If you start making excuses, you may start an argument. If you choose to be agreeable an argument is not possible.

Step Five - If there is an excuse use this magic phrasing. “I am sorry, I messed up, there is a reason and I would like to talk to you about it at some point but the most important thing for you to know now is that I am sorry.”  If the person is calm and rational they will immediately ask you the reason. If they are emotional, angry and upset, they are not ready to hear it and have a discussion about it, and could probably care less, but you have left an opening to talk about it later if you need to. If you absolutely must make an excuse right now for goodness sakes make the excuse briefer than your apology and whether writing an excuse or giving it face-to-face, follow it with another statement of apology.

Step Six - Make sure your voice, facial expressions and body language are sending the same message as your words. If you are not feeling respectful, your tone will tell the tale. When your word message and your nonverbal message disagree, people will always believe your nonverbal message is the true message that comments your honest emotions. If your voice is sarcastic in your message you are wasting your breath to apologize. You must apologize with complete sincerity without any subtle eye- rolls or exasperated looks or even looking away slightly. Anybody who has a teenager in their home knows the difference between a smart mouth apology and a real apology.

Step Seven - Sympathize. This is especially important if the person is emotional. If someone is emotional they will keep emoting till they feel heard and understood. Case in point, an angry customer will get angrier until they know you get their pain. Empathize.  Let the person know that you can identify with his feelings.  For example, “I understand you’re very frustrated about receiving a faulty product or poor service.  I would be frustrated to.”  When someone feels heard they don’t have to keep talking! Their feelings have been validated. You can also assure them that you did not mean them harm. For example, “I did not mean to offend you with that comment.”

Step Eight - Accept responsibility for the situation. You’re an adult. You cannot blame mommy. Be accountable. If you’re not going to be accountable do not apologize just to say you did.  If you are willing let the person know that you intend to do whatever it takes to make things right. You can’t help what has already happened, but you will come up with a solution to the problem. Or if you’re in a business situation you will find someone who can. When I suggest you take responsibility I mean, you accept it. Do not say, “We are sorry.” Instead say, “I am sorry.”

Step Nine - Show your regret. Just as I said people will complain till they see you get there pain, some people will not fully accept an apology unless they know you have suffered too. I don’t mean that meanly, just know that pain for pain can make a conflict disappear. Come right out and say you are sorry or ashamed. “I felt bad the minute I said that. I'm ashamed of myself.”

Step Ten - Take the heat. This is the toughest part. After you say you’re sorry you need to stop and listen to hear the person share their pain and anger.

Step Eleven - Repair the damage. To be complete, an apology must correct the injury. If you damaged someone's property, offer to fix it. If the damage isn't so obvious, ask “What can I do to make it up to you? There may be nothing concrete you can do, but the offer must be sincere. “I'll try to keep my mouth shut in the future. Meantime, let me buy you a cup of coffee. “Another way to repair the damage is to send a note or a small gift.

Step Twelve - Take action. For your apology to be complete you need to do something to repair or fix the injury. Decide what you can do and tell the person. If you won’t be late next time, if you will no longer take cell phone calls at dinner, if you will replace the defective or incorrect product as quickly as possible. Try to avoid the word “try” in your repair step. I have a pet peeve about the word try. I think it makes the user sound like a teenager, “I’ll try not to be late.” Sounds in a teenage vernacular, lame.  If you don’t know what to do, if there is nothing obviously concrete for you to do or you’re not sure what you thought of is enough ask, “What can I do to make this up to you.” If you’re dealing with a customer, you can offer a bonus of some sort or waive fees if possible. It doesn’t hurt to offer friends and family a bonus as well.

Following these steps can soften a hurt. And know that it never hurts to send flowers!!

Patti Wood, MA, The Body Language Expert. For more body language insights go to her website at www.PattiWood.net. Check out Patti's website for her new book "SNAP, Making the Most of First Impressions, Body Language and Charisma" at www.snapfirstimpressions.com.