Chief White House strategist Steve Bannon got a bit touchy-feely with chief of staff Reince Priebus during an interview on Thursday — and body language experts have conflicting takes on what the intimate moment might reveal about the powerful men.
Several recent reports have described a rocky relationship between the two Trump administration officials, who personify the newfound polar opposites of the Republican Party: Bannon's right-wing populism and Priebus' establishment conservatism.
When they sat down for a joint interview at the Conservative Political Action Conference outside Washington, D.C., on Thursday night, that divide appeared to take the form of bodily cues — particularly during the very final moments of the back-and-forth.
"Reince has been unwavering since the very first moment I met him," Bannon said before interviewer Matt Schlapp wrapped up the chat.
Steve Bannon says 'globalist media' will stay 'opposed' to Trump
Then, in a brief display of affection, Bannon patted Priebus' right thigh several times. But the touch apparently didn't sit well with Priebus, who flinched and hastily pushed his White House colleague's hand away.
Georgia-based body language expert Patti Wood told the Daily News that Bannon's comment, and touching, unveils a number of things about his perceived dominance over Priebus. 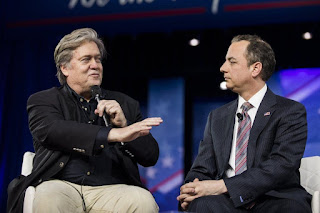 White House Chief Strategist Steve Bannon sat down for a joint interview with White House Chief of Staff Reince Priebus on Thursday.
"I don't know their working relationship, but Priebus didn't like that the statement implied intimacy," Wood said, noting Priebus looked down and turned away immediately after Bannon's compliment. "He wanted to separate himself from that statement."
The subsequent touch, Wood continued, "has a sexual feel to it" — which Priebus was "obviously repelled by."
Priebus and Bannon insist there is no division between them
"He doesn't want that touch to linger at all," Wood said. "It shows irritation … The pressed together lips and the downturned eyes suppresses his anger."
Bannon, on the other hand, stayed confident and even appeared to lean in a bit, revealing the former Breitbart News chief's confident control of the situation, according to Wood.
"He was rebuked like that and stayed planted forward, that to me is the most revealing about Bannon's character," Wood said. "The man is going to stay and not back down no matter what." 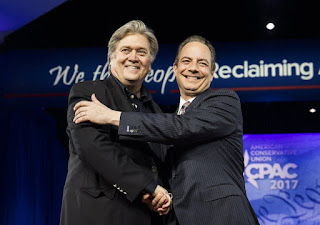 Several reports have described a rocky relationship between the two top White House officials.
But fellow body language expert Lillian Glass disagreed with Wood's analysis, telling The News that the two men are just engaging in a President Trump-esque moment of intimacy.
Trump upset over SNL portrayal of Bannon as Grim Reaper: report
"They're part of that Trump affection, physical, 'hey, I'm not afraid to let my emotions out,' " Glass said. "When Trump likes you, he touches you and these guys are following suit."
Priebus' apparent striking at Bannon's hand was actually just a complimentary pat, Glass claimed.
"When you watch it, it's a very kind of warm thing," she added.
But there was one body language cue that both men appeared to be engaging in throughout the 30-minute interview that displayed discomfort, Glass conceded.
"Look at where their hands are — they're covering their private parts, that means they feel very vulnerable," she said.