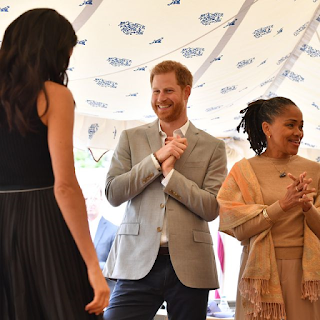 Just when we started to recover from Prince Harry and Meghan Markle's whirlwind summer, the Duchess of Sussex headlined an event promoting Together: Our Community Cookbook by Hubb Community Kitchen (with a foreword by HRH herself!). Meghan was joined by her husband and mother, Doria Ragland, at the book's launch party. Yep, that means we caught our first glimpse of Meghan with the two most important people in her life. Cue the body language analysis.

In this case, the celebration was all about Meghan and the women of the Hubb Community Kitchen (as it should be). "For the first time ever, Meghan and Harry didn't make each other their priority," Patti Wood, body language expert and author of SNAP: Making the Most of First Impressions, Body Language, and Charisma told GoodHousekeeping.com. But it's not what you think: "It's clear Harry prioritized his wife and mother-in-law, since they were the guests of honor and he was simply there as a cheerleader."

You could spot the difference as soon as the trio got out of the car. Unlike previous engagements, Meghan didn't wait for Harry. Instead, she walked with her mother and let Harry follow — and he looked happy doing so. "Despite this difference, he's at ease," explained Wood. "In fact, there's still a playful nature about him."

While he clapped, cheered, and grinned during the entitreity of the event, his finest moment came after a big gust of wind ~ruined~ (read: momentarily messed with) his wife's hair. Impossible, no? Wood told us that this movement had a deeper meaning: "This was Prince Harry's way of telling his wife, 'I'm here.' There's a child-like sweetness to this simple gesture, which indicates that he's not bothered by taking a backseat for the day."

So, ya think that's sweet? Well, Meghan and Harry both twisted their wedding rings during Meghan's speech as pointed out by Susan Constantine, human behavioral expert and author of The Complete Idiot's Guide to Reading Body Language. "This has different meanings depending on the environment. In this case, it's likely because their husband or wife is foremost on the mind," Constantine told us. 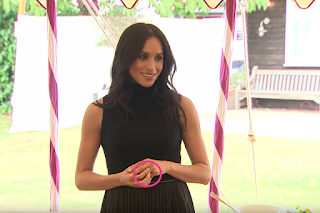 Now, watch Harry very closely: (Watch videos at link below)
That's what love looks like. Or a not-so-subtle nervous tick. We'll go with the former. 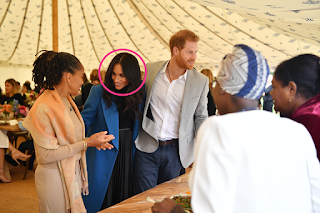 While this event was undoubtedly a big day for the Duchess, it was also the first time that her mom, a yoga instructor and social worker, tagged along for a royal engagement. "You could sense their nerves," Constantine said. "Every now and again, Meghan would take quick glances to check on her mother, which indicates that she was distracted by the newness of it all." WHICH. MAKES. TOTAL. SENSE.

One thing's clear: Meghan is her mother's daughter. "When speaking, both women would talk with their palms up and fingers open, which symbolizes honesty, collaboration, and feedback," Constantine explained. Now, that's an appropriate feeling for an event celebrating a cookbook about — you guessed it — collaboration.


Point blank: If this was a different event, the experts would have different feelings. This particular instance, however, was about Meghan and Doria. Sure, it's odd to see the couple apart from one another (no back rubs, Meghan?) but given the fact that the event was about a cookbook — not the couple — it makes perfect sense. And can't we all agree that it's pretty incredible to see Prince Harry sit back and watch his wife in amazement. Don't mind us still swooning over here.

Link to article with videos - https://www.goodhousekeeping.com/life/entertainment/a23409141/prince-harry-meghan-markle-doria-ragland-body-language/

Chris Watts Body Language in Media Interview, Suspect in murder of his wife and children.


Here is the link to the HLN national tv interview I where I analyzed Chris Watts body language.

He is not using the name of this wife and children.  Typically when your loved one is missing and you are innocent you want to pull them closer by repeating their name and or you connect to them. He does NOT say,  “My wife my wife my wife, my babies where are my babies, my babies.” He says, “I’ve called friends.” And he gives an odd half head tilt shoulder shrug, and indication it’s not a full truth.

Listen to his even unemotional voice as he says horrible things that should elicit emotion. “I got back ..it was like a Ghost town…It’s like a nightmare that I can’t wake up from.
Notice after his says, ‘…Nobody was here, nothing…” He pushes his is teeth over his lips in what I call a Tongue to cleanse indicating he is worried about what he just said. He is also rocking slightly side to side and has his arms crossed over this body. Those are signs of stress, but very strained. Here is what is even odder. If you are describing a search through your house for your missing family how do you think you would say and it and show it? You guessed correctly. With emotions and gestures and body movements as you recall your search. And typically vivid word picture descriptions of a real experience that you recall. But if you are lying you don’t have the images or the emotions so we don’t get that from him, which is an indication he didn’t search for them in the house, because he already knew they were not there.
He gives his missing wife several digs during this short interview, saying, ‘…shes got friends I don’t know about and here passive aggressively digging at a real or imagined habit of not responding to his texts but to her “people?”
Do you think an innocent husband whose wife and children are missing would dish his wife to the media?
“If she doesn’t respond to her people that’s fine she’s got stuff going on but not to respond to her people that Was Not (rather than IS not) like her.
Notice that he speaks about her in the past tense.  He speaks of both his wife and his children in the past tense several times throughout the interview.
He gives more lip cleanses. And then at time code 203, he gives a full lip withdrawal sucking this lips in. People can do this to withhold strong emotions like grief and anger but I would see micro facial cues of those emotions as he tried to suppress them. Here I don’t see them. So I can deduct that that the lip withdrawals is an indication he is withholding the truth.
When the reporter says something to the effect, about how he is not out of his mind, his response is about getting home, and how fast he was going and his search through the house. But again notice his words and his nonverbal cues don’t match. when he described getting home, we don’t see or hear him relive that frantic ride to the house or the frantic search. Instead, he has this slow unemotional delivery about finding it to be a ghost town, and he is standing with his arms across his body and we later see a broad alpha stance he is not was not reliving a frantic adrenaline-fueled search through the house for his loved ones, that would have come after
Another creepy tell. He says I hope that she is somewhere safe, that she is “there” That is a tell.  He says that she is there. That makes no sense if he doesn’t know where she is but makes perfect sense if he knows where he has buried her.
Then he says, “I want “her” back so bad, I want….those kids” back so bad.”  Again no personalization of wife’s or children’s names, or name repetition and he nonverbal behaviors don’t show grief or worry.
Then he gets even creeper and we see a sign of a malignant narcissist.  He laughs, and it not just a stress laugh, he is smiling and its oddly sustained. He is doing more than using the laughing to cover that face those statements he just made are lies. In fact, he is eerily showing what is called dupers delight that he has seemly gotten away with it.  Another indication that he doesn’t feel grief is that he follows the statement with a filler “Umm” to fill the void were real grief should be. And again his mouth cues shows that what he just said is not going down well.
When asked by the journalist about how he should feel see his odd retreat back  and ear to shoulder shrug that indicates what was said does not sound good to him. And he reply’s… I want my family back” rather than I want to find my family my wife my babies help me find my wife and babies.
Notice this odd statement, “I don’t want to be in his house again with nobody here.’  as if he knows they won’t be back. How does he know that, at this point they are only missing.
He says, “Everything’s checked out?” What does that mean???  Rather than, there is not sign of them.
Horrible eerie tell at around time code 5:57- He says with not affect in voice or body language “I want them home so bad.” As he shakes his no.

Top of Form
GET THE BEAST IN YOUR INBOX!
By clicking “Subscribe,” you agree to have read the Terms of Use and Privacy Policy
SUBSCRIBE
Bottom of Form
“Nicole called me when she was at the door and that’s when I came home and walked in the house,” said Watts, who stood calmly on his porch wearing a North Carolina Tar Heels shirt. “Nothing was here. She wasn’t here. The kids weren’t here.” “When her friend showed up, that’s when it registered, like all right, that isn’t right.”
Watts came close to shedding crocodile tears when speaking about his missing kids.
“It was tearing me apart last night,” he continued. “I want everybody to just come home. Wherever they’re at, just come home. That’s what I want.”
When a reporter asked if the couple had an argument, Watts replied, “It wasn’t like an argument. We had an emotional conversation. I’ll leave it at that.”
Moments later, Watts turned to the camera with a message to his family:
“Shannan, Bella, Celeste, if you’re out there just, just come back,” Watts said. “If somebody has her, just please bring her back. I need to see everybody. I need to see everybody again. This house is not complete without anybody here.”

hris demonstrates his phoniness because he is talking too much and giving too much information. He smiles and chuckles during the plea, which is very contrived and also reveals he is being fake. Chris is showing inappropriate facial responses for what’s really going on in this situation, where his wife and two children were missing at the time. He has his arms crossed at one point. The bottom line is, he’s closing off because he knows he’s don something bad.”