Anger And Hatred, What Are Powerful Speaking Techniques To Move An Audience? 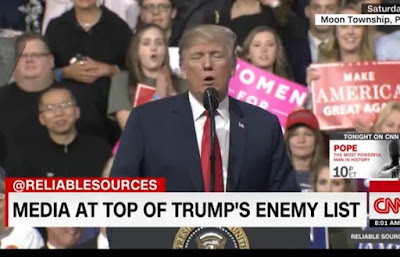 I speak on nonverbal persuasion theory.  I have studied hundreds of hours on different political figures speaking over the years from Kennedy and Martin Luther Kind to Hitler. I have indeed watched hundreds of hours of video of Hitler's speeches, parades and interactions. I was the nonverbal communication expert on a six-part series on Hitler’s rise and fall. I watched the propaganda. Anger has the strongest pulling effect.

In Trump's  Pennsylvania rally after the Parkland shooting Trump is seen speaking with not one not two but three blonde teenage girls behind him. In this rally speech trump smears, name calls and denigrates the credibility of the national media and trash mouths specific individuals. The speech tears down. It's not rallying people to a positive cause or a positive change. It's filled with anger and attacks without a focus other than to be angry.

In the background the girls make faces grimacing and smiling. And seemingly cheer him on smiling at the cameras. These are not young people standing up to a cause they believe in. They are cheering an angry guy. When I watched it a chill went up the back of my neck. Because these are young people who are being persuaded by anger. In the video, you can see that the girls don’t even hear the end of his sentences before they cheer or boo.  It doesn’t matter who or what he attacks. They just hear a few hate-filled words and react with their limbic brains to the anger. Anger is the strongest persuasive force. But, there is a cost.

So what are the positive actions we can take? I plan on talking about this with young people I know and ask them what they feel as Trump speaks, I will work on being someone who will not only point out negative behavior but notice if I model better behavior. I will focus on positive action.