Trump Shooting the Bird at the Female Astronauts, Trump Flipping off Astronauts. 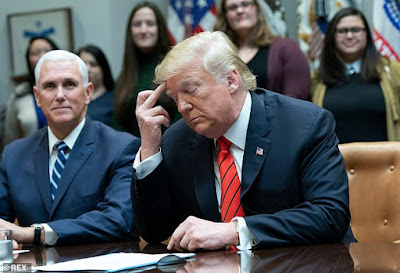 As a body language expert, I have looked at the video of Trump shooting the bird to the astronaut for international media. The article is in the comments. FYI, I had a feeling that I would only be asked by the foreign press.
I watched it carefully many times to be able to share with you what he did, and that he meant to give the bird. Notice first it's timing. Right after she corrects him by saying, "There have been many female space walkers before us,”
he swiftly and dramatically moves his upper body, looks up and to his right then shuts his eyes down and puts his head down to the right a combination retreat and dismiss gesture cluster, that also included an unhappy expression with flat closed lips going down at the very corners. Then he shot the bird placing it strategically in the middle of his forehead to emphasize it and moved it up and down in front emphasizing it more. Then slowly he moves the symbol to the side of his head moving it up and down to emphasize it more and let it linger in our minds, but also make it appear on the surface that it could be something else. Notice that he is extremely careful not to mess his hair and notice his facial cues go from irritation to anger to dupers delight, glee as he finishes it. He enjoyed giving it and did it intentionally.
It was not a scratch. It was a passive-aggressive shooting the bird symbol. How do I know it wasn't a scratch? Right now, go to scratch your forehead. To scratch, two or more of your fingers typically curl at the ends to get some nail contact and more power at the fingertips. It's not a block, stress or comfort cue. Those commonly are done with more fingers to cover the face. And notice how very careful he is to not muss his hair. Forming the finger to flip off someone requires effort as does being careful not to mess up your hair and again the little smile when he finishes it says it was worth it to him.
Yes, in a moment when these astronauts should have been honored, A moment that should have been shown to children around the world what wonderful things are possible. A moment meant to honor what our country can do. He ruined it. By the way, if you look for the video you will notice that most news markets have edited his rude symbol out and show Pence or a picture of the space station as he is doing it. That is wild in and of itself as it hides the truth from us.


Here was what the media chose to say from what I shared above. Notice the title of the article says he is accused of it rather than he obviously shot a bird
Here is the article I was quoted in https://www.dailymail.co.uk/news/article-7597647/Donald-Trump-accused-flipping-bird-female-astronaut-fact-checked-him.html


Body Language Expert Patti Wood.  For more body language insights go to her website at www.PattiWood.net. Check out Patti's website for her book "SNAP, Making the Most of First Impressions, Body Language and Charisma" at www.snapfirstimpressions.com.