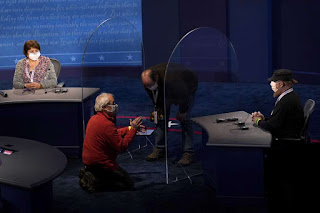 At the top of the debates.

The Candidate's energy and dynamism coming out on stage before they take their seats and their animation and energy throughout the debates will be among the most critical factors to determine who we see as "wining" the debates.

Energy impacted our perceptions of who looked powerful in the Biden Trump presidential debates. We are also looking at Pence's to see if he looks energetic and healthy and Harris to see if she fears getting COVID 19 from Pence. Because some viewed Trump as "out of control" in the presidential debates will be looking for each candidate's self-control as well.

We also want to see if she can give some of her energy to her ticket in the pairing with Biden's calmer low-key energy on the Democratic ticket.  I will share more later about first impressions later in these notes.

The Safety of the Stage for Covid 19 transmission in the Vice Presidential Debates between Harris and Pence.

Looking at the photo of the stage for tonight's Vice Presidential Debates, I would say it doesn't seem safe for protection from aerosol transmission based on the research I have read and the aerosol transmission experts I've consulted. I consult with various experts as I advise my clients on safely interacting above the mask and or at a distance.

If you look at the photo, all the people setting it up are wearing masks. It's stunning to see even those sitting in the chairs briefly pretending to be the candidates are taking more precautions that the real live debaters will be.

So, I think the audience needs to think of how they would feel to be that close for that long with someone who has had exposure to several people who have tested positive.

So, Harris will have a factor of danger and fear that Pence will not have to deal with in the debates.  That is a great advantage for him. So, will she look scared? Will her body freeze or pull away, especially if Pence makes it a point to lean in and speak loudly and open his mouth wide?

Study Pence's expressions. Especially his smile. Will he smile in a friendly, warm manner, or will he show enjoyment at making Harris feel like she is risking her health and Biden's health. He can sometimes offer a smirky smile or pleasure when he feels superior and may not play well, considering the circumstances.

Kamala also smirks and glares when she feels she has achieved a "gotcha" moment, but if Pence starts the smirk debates, we will know that he thinks he began with the upper hand because she agreed to debate with this potentially risky room set up.

I train and consult on negotiations, and I give them the insight that at times, the location, table, and who sits where and who starts before the talks are gaining competitive advantage before the actual face to face negotiations. As in, She gave on this and this so we know we have an advantage going in"

Some may be old enough to remember the seemly never-ending negotiations about the table shape in the Paris Peace accords as the U.S. left Vietnam. (One of the largest hurdles to effective negotiation was the fact that North Vietnam and the National Front for the Liberation of South Vietnam (NLF, or Viet Cong) in the South, refused to recognize the government of South Vietnam; with equal persistence, the government in Saigon refused to acknowledge the legitimacy of the NLF. Harriman resolved this dispute by developing a system by which North Vietnam and U.S. would be the named parties; NLF officials could join the North Vietnam team without being recognized by South Vietnam, while Saigon's representatives joined their U.S. allies.

A similar debate concerned the shape of the table to be used at the conference. The North favored a circular table, in which all parties, including NLF representatives, would appear to be "equal"' in importance. The South Vietnamese argued that only a rectangular table was acceptable, for only a rectangle could show two distinct sides to the conflict. Eventually, a compromise was reached, in which representatives of the northern and southern governments would sit at a circular table, with members representing all other parties sitting at individual square tables around them.)

Pence required the desks so both candidates could be seated. It a novel choice for debates this close to the election.  Audiences will be looking at this choice. We are all wondering about that choice as he usually would have a height advantage that would make him look stronger and more alpha.   Is choosing the desks to cancel that noticeable difference, so it allows him to be more aggressive in his delivery without looking like a bully? Gender differences and stereotypes will play a role in these debates.  Pence does not want to come across as mean, but he already does to a degree by forcing an in-person debate when he puts her at risk. Will he push more or less because of that?

Some may conjecture that he insisted on being seated because he does have COVID, and he needs to stay seated because of that illness. But it could also be a way of "softening" his masculine (power height) advantage

We are typically attracted to broad emotional range in our candidates, we find a candidate that can laugh and smile and be calm and powerful and angry as more dynamic and energetic and more entertaining to watch.
Energy was a big difference in the Bident Trump debates and difference in  energy and dynamism will be something we are looking for here. Our limbic brain believes that the more energetic alpha candidate makes the best leader, and the alpha candidate is often seen as winning the debates. In fact in debate research audiences often determine who they think is the "winner" in a fraction of second of seeing the candidates on stage together before the debates have started based on the nonverbal charismatic factors of Likeability Attractiveness and Power without noting the forth of those four first impression factors Credibility.

Looking at each of the candidates' smiles as smiling can make someone more attractive, appear more approachable and less dominant, and are interpreted differently based on gender. If Harris doesn't smile (a happy, sincere smile), voters may see her as aggressive and less attractive.  (higher intellectual and social abilities were attributed to individuals with esthetic smiles. They were also judged to be more attractive than the same individuals on photographs) (Previous research has found that smiling is associated with attractiveness in women, but dominance in men. These are probably a result of gender stereotypes. One finding in the present study was that women's smiles were judged less authentic than men. Krumhuber et al. (2007) speculate that this is because women tend to smile more than men, so their behavior is seen as more usual and, therefore less informative. The reverse may be true for men.)


Any woman that ever had a man say to her, "Why aren't you smiling" know that men view their lack of smiling negatively. In my gender differences in the workplace and sexual harassment prevention programs, I train women not to smile when they state an essential point or opinion so people will take them seriously. I instruct men not to assume if they tease and joke with a woman, and she smiles that she is pleased she may be upset and angry but may have been raised with the gender-based admonition to cover her displeasure with a smile.

Anger shown by the candidates will be an essential emotion for us to monitor tonight.  Anger is shown in nonverbal research and persuasion research as the strongest persuasive emotion. Anger has been used successfully by many leaders throughout history to show a leader's Alpha characteristics and move a crowd.

(FYI I am an expert in Hitler's body language, and he is the classic iconic example of an angry speaker, though in reality, he showed a broad emotional range.)

Anger is seen differently based on gender stereotypes. Take, for example, how many people have retained a negative impression of Elizabeth Warren. Through a close analysis of her speeches show a broad emotional range, and she is known as being extremely warm in her face to face relationships because she was seen as angry in several congressional hearing for some it overrides the reality of her warmth and many held an unfavorable view t