How Do You Get Someone to Be Honest and Not Lie to You?

The Law of Honest Feedback

Make requests throughout your delivery and ask for agreement with each point and sub point.

The Law of Honest Feedback-

“It seems reasonable to me.” “How does it seem to you?”

Be ready to seem surprised, but not upset if they do not agree. Also, make sure you listen to their doubts carefully without interruption

More on my interview on CNN reading Bishop Eddie Long's body language,
Bishop Eddie Long's Body Language in his sermon after Sexual Molestation Allegations
When you are doing a body language analysis of someone suspected of wrong doing you go through a multistage process. One of the first steps is to compare the person's behavior with a baseline of what a normal innocent person's body language would be in the circumstances. You also take into consideration what the normal behavior would be for a power person (celebrity, politician, sports figure or in this case popular minister of a large congregations' behavior would be in these circumstances. Innocent people who are accused and the in the grip of media attention want to speak, they want to speak about their innocence, they want to speak as soon as possible and they want to speak continually until they know you believe in their innocence. Even if Bishop long was advised by his lawyers to "..not try the case in the media." I believe if he was totally and completely innocent of the molestation charges he would have said he was innocent of those charges. Instead he used the confusing phrase that, "I am not the man portrayed in the media.' Even someone guilty of the charges, could believe he was not a "bad" guy. Believing yourself to be "portrayed" differently than you see yourself is not the same thing as not having committed a crime. Recently, I watched a murderer's testimony of killing two of his ex girlfriends. He said, "I am not a bad guy." "I was angry." "I regret the killing ----(the second) girlfriend." "I wished I hadn't done that." He regretted killing the second girlfriend, because that led to his arrest! . But he believed himself to be a good guy.
In the Bishop Long sermon he also nodded his head counter to his statements several times a clear cue of deceit, he also did tongue thrusts of passive aggressiveness. More later. Patti Wood, MA, Certified Speaking Professional - The Body Language Expert. For more body language insights go to her website at http://PattiWood.net. Also check out the body language quiz on her YouTube Channel at http://youtube.com/user/bodylanguageexpert.
Posted by body language lady at 9/28/2010 10:31:00 AM

The Love Language of Hands 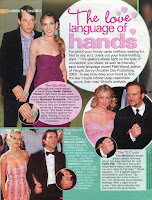 For proof your honey cares (without waiting for him to say so!), check out your hand-holding style. "This gesture sheds light on the type of connection you share, as well its intensity," says body language expert Patti Wood in First For Women Magazine. To see how deep your bond is with your honey, find the star couple whose clasp resembles yours, then read Patti's analysis at the link below!
http://www.scribd.com/doc/38188766/First-for-Women-the-Love-Language-of-Hands
Patti Wood, MA, Certified Speaking Professional - The Body Language Expert. For more body language insights go to her website at http://pattiwood.net/. Also check out the body language quiz on her YouTube Channel at http://youtube.com/user/bodylanguageexpert.
Posted by body language lady at 9/28/2010 12:01:00 AM