The HUG - What does it Reveal? 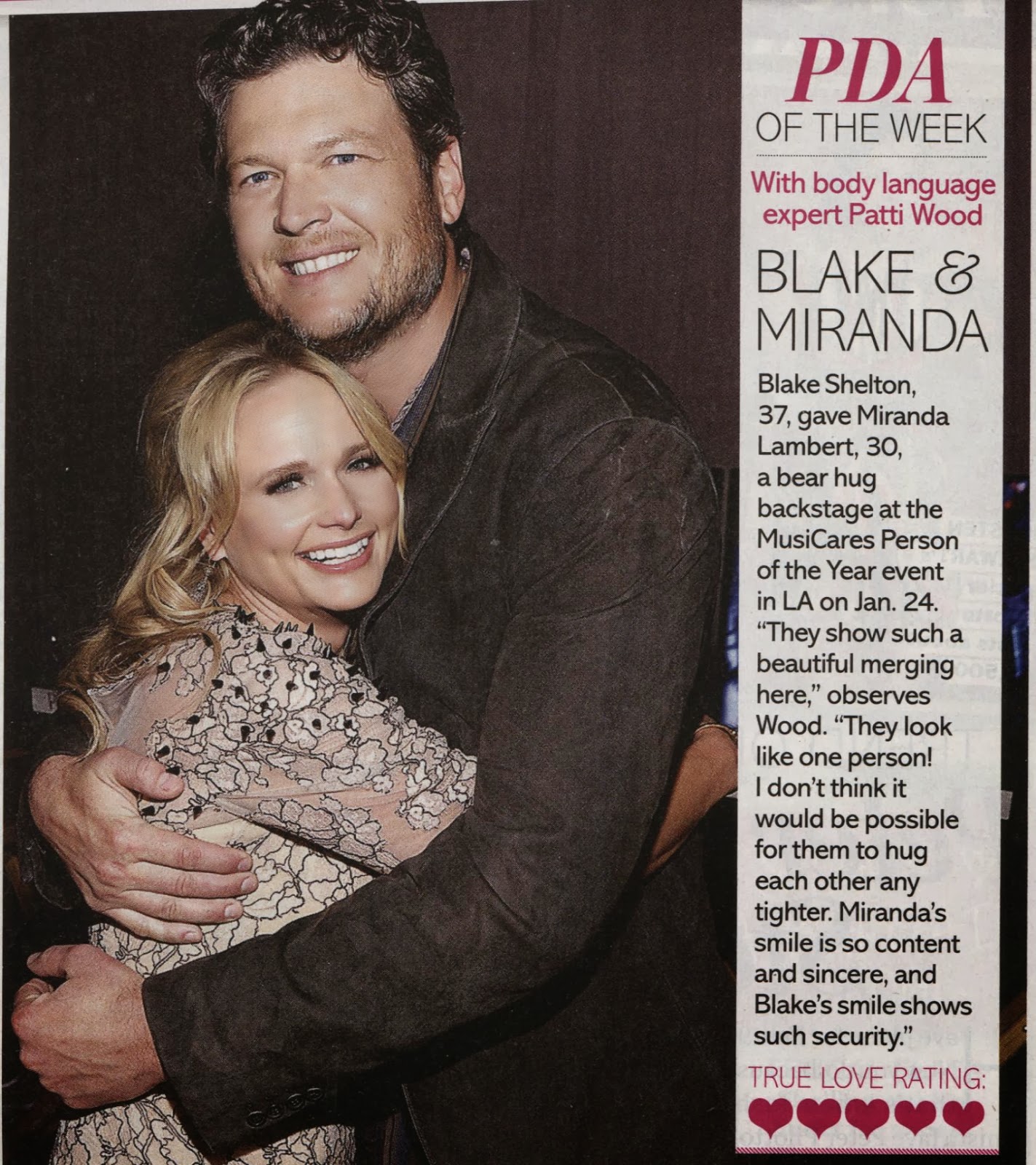 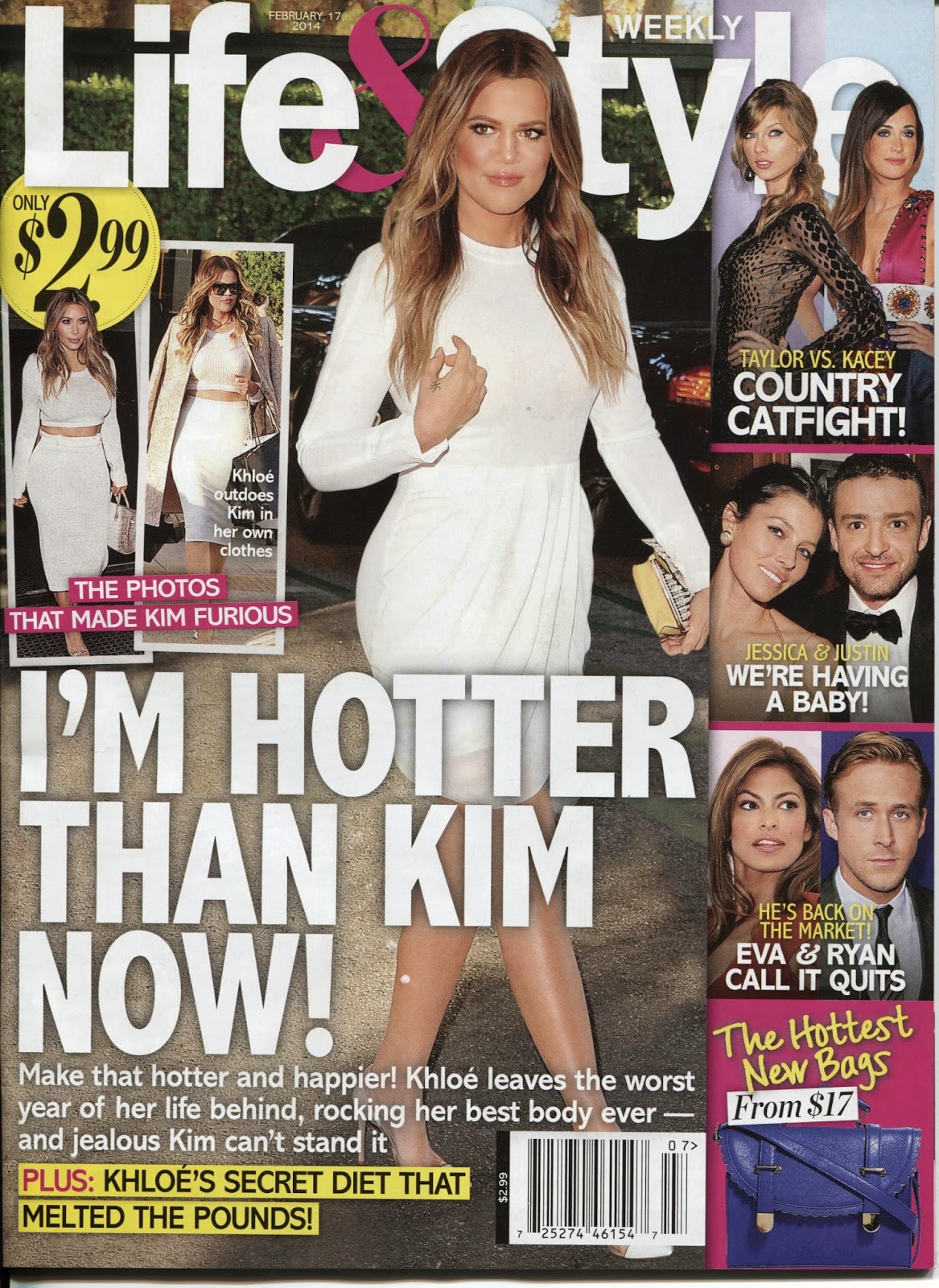 Blake Shelton, 37, gave Miranda Lambert, 30, a bear hug backstage at the MusiCares Person of the Year event in LA on Jan. 24.  Patti observes that they show such a beautiful merging in the above photo.  They look like one person!  Patti noted that she does not think it would be possible for them to hug each other any tighter.  Miranda's smile is so content and sincere, and Blake's smile shows such security according to Patti.  Patti gives this couple a 5 on the Life & Style True Love Rating scale.

Video Games Effect our Mood and Can Make Us Nice or Turn Us Into Jerks.


Video Games Effect our Mood and Can Make Us Nice or Turn Us Into Jerks.

I have a friend that said years ago he was addicted to an online Video game. He said that he played nonstop when he was not working,  and that the war game made him feel strong powerful and he eventually realized, very very angry.  In my book SNAP I have a chapter on Tech impressions and discuss how technology effects the way people perceive you here is research from my favorite magazine, THE WEEK on how gaming effects are mood.

Media-driven panics about what video games are "doing to our children" are scoffed at by gamers and most technology journalists. But are these haughty dismissals justified? Because studies are now coming thick and fast that find the minds of young people playing video games are affected by what they play. And not always for the best.
In a study titled Remain Calm, Be Kind, a quote from US general Colin Powell, researchers Whitaker and Bushman made the point that, of all media, video games are the most perfectly architected to change our state of mind. They're active: Gamers are indirectly doing things that they'd otherwise imagine or witness in books or film respectively.
They call this "managing our mood states," implying that aggressive actions make us feel short-tempered, while slower-paced games will cause us to feel relaxed.
They set out to demonstrate this. There is a wealth of information that ties aggressive video games to anti-social behaviour. But they wanted to complete the circle: To show that "nice" games make for nicer people too. If we had this information, it would suggest that the link between game and gamer is a strong one and can be both positive and negative.
They gave participants a selection of games to play — violent, neutral and relaxing — and then asked them to compete against each other in competitive games. Those who played high-stakes gaming like Resident Evil were more competitive than those that played less intense games like fishing.

(Facebook.com/ResidentEvil)
Nice games make you nicer
The second part was asking the participants to help sharpen pencils. They didn't know that the experiment wasn't over, so they'd be acting entirely genuinely. They found that significantly more "relaxing" gamers helped out with this trivial task than violent ones, and summarized by saying that this was the first study to ever establish that nice video games make you a nicer person.
So far, so good. We already know that violent video games make violent people. They also apparently tend to push people into more "dangerous lifestyles": Drugs, wild sex. Not the typical image of your average gamer, granted. But the question is why and how these things happen. A relationship between video games and real-life violence is not damning evidence in itself.
In another study, a group of researchers looked at reactions to faces in pain for gamers, while they lay in fMRI machines. An fMRI machine works by detecting the movement of blood around the brain, and thus what areas are being used at what times (it stands for "functional" Magnetic Resonance Imaging).
What the researchers wanted to know was how the processing of emotions was affected by a lot of video gaming, so they watched the action happening in the frontal lobes of the brains as their subjects looked at the pictures.
They found that the gamers — who all play Counter-Strike, a Call of Duty-type war game — responded less to images of real violence than non-gamers. Images of accidents and disfigured faces did not trigger the same neuro-chemical reactions as for other people.
The researchers concluded by saying players of violent games have better top-down control of their emotions. Put more plainly: They lack empathy.

(Facebook.com/CallOfDuty)
A lack of empathy?
That certainly echoes the worries of parent and teacher groups. Although, two caveats spring to mind: Gamers might well not react to disfigured faces as much, but that might not mean they lack empathy. A lot of people began to lose touch with the image of starving children in NSPCCC adverts — which doesn't make them monsters, they've just seen the image a few times before.
And the second thing to bear in mind is that fMRI has "worked" on a dead fish. That's not to discredit the study, but it does put the results in slight perspective.
There is a hook in the study, though: The idea of BIS, our Behavioural Inhibition System. This system allows us to react better in uncertain — often violent — situations. In a war zone, when bullets are flying over your head and have been for several weeks, the last thing you want is the constant recognition of the brutality of warfare.
Similarly, in war games, to be surprised by every act of violence will get you killed. We inhibit these typically empathetic behaviors because, frankly, we have to.
The study goes on to suggest that maybe that's how we can classify those who play first-person shooters: By a "habituated" BIS circuit, or a lack of empathy to the point it isn't mandatory. They found that the part of the brain associated with empathy, the lateral prefrontal cortex, are used less in experienced gamers.
This might be active inhibition of empathy for the sake of winning the game. In-game situations are often made more intense by pleas for mercy or kindness which frequently have to be ignored.

World of Warcraft (Facebook.com/Warcraft)
Immersive vs non-immersive
What does this mean outside of the game? It's not like fictional violence is the invention of video games. Why, German folk tales have been preaching the virtue of a messy punishment for centuries. And then there's the bible — which has been mandatory reading for billions of people.
But video games differ from these media crucially because we're not just being asked to listen and take part passively. Even as storytellers, we are playing the part of a narrator, not a performer. In video games we — everyone — is an actor. And we have to follow the script we're given.
There's another study, Virtually Numbed, published this year, which tasked video gamers with an endurance test. They had to pick up paperclips out of a bucket of ice cold water either after reporting that they were acid gamers or actually playing a video game. Instead of looking at good vs bad, though, the researchers were interested in immersive vs non-immersive.
The researchers wanted to see what the effect was of putting yourself in the place of an automaton — i.e., a video game character that did not display emotions. They found that those people who did this were more tolerant to pain than those that didn't. They tested the hypothesis with other experiments and the conclusion was that players act similar in real life to the robotic avatars they play.
It's not just searching for good vs evil, or picking up the traits of characters you enjoy playing as. The mere act of pretending to be a virtual character can change self-perception — even down to the way we perceive physical sensation. Video games can, rather quickly, change you.
There's another paper, from 2009, with the ominous title More Than Just a Game that does literally think about "the children." Because childhood and the teenage years are such important parts of growing up, it's important to see what they're interacting with during that time.

Knights of the Old Republic (Facebook.com: StarWarsTheOldRepublic)
Video games mean trouble
The researchers took a dim view of video games. In fact, they found video games correlated with everything from drug use to poor romantic relationships. And while some of this is unsubstantiated, plenty of it is backed by their evidence, in the form of university questionnaires, and the decade of research that's come before them.
"Video games mean trouble" is the message that seems to come through in all of this. It's jumping the gun, sure, given what we know now about the benefits of relaxing video games. But while some video games have a positive effect on mood, the ones that do, such as Endless Ocean, make up a negligible market share compared to big sellers such as World of Warcraft and Call of Duty, both of which are stacked with blood and death.
The psychology of all this isn't uplifting: Violent video games are linked to real-world violence, and we should stop pretending otherwise. That link is blurred, but in terms of neurochemistry there is now research that confirms that the brains of gamers change depending on what they do in-game.
In the game Knights of the Old Republic, a classic Star Wars spin-off, gamers can select whether to act like the "good" Jedi or the "evil" Sith. Sitting at your console, it might be hard to believe that what you do next might actually impact who you become in the real world. But it turns out the Dark Side is very real.