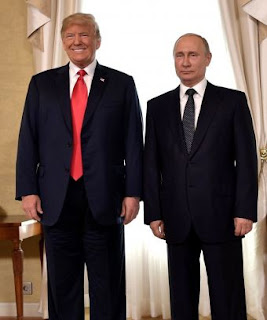 Here is a piece I did for Refinery 29 on the encounter between Donald Trump and Vladimir Putin. It was one for the ages!
On Monday, the two world leaders had a private meeting that lasted hours before coming before reporters for a disastrous press conference in Helsinki, Finland. In it, Trump sided with Russia instead of American intelligence agencies when it came to the issue of the Kremlin influencing the 2016 presidential election, implied the U.S. was to blame for tensions between of both countries and didn't once condemn the Russian regime for its long history of human rights violations. Total normal stuff to do in front of a longtime adversary. Oh, and Putin might have made a reference to the infamous "pee tape."

Trump's remarks and refusal to stand up to Putin drew condemnation from both sides of the aisle, though some Republicans stood behind the president.
"Today’s press conference in Helsinki was one of the most disgraceful performances by an American president in memory," Sen. John McCain said in a highly critical statement.
He added: "No prior president has ever abased himself more abjectly before a tyrant. Not only did President Trump fail to speak the truth about an adversary; but speaking for America to the world, our president failed to defend all that makes us who we are — a republic of free people dedicated to the cause of liberty at home and abroad."
Democrats such as Senate Minority Leader Chuck Schumer agreed. He said: "Millions of Americans will continue to wonder if the only possible explanation for this dangerous behavior is the possibility that President Putin holds damaging information about President Trump." Sen. Tammy Duckworth went as far as suggesting that Trump has been turned into a Russian asset, "perhaps without his knowledge."
But, the devil is in the details. Refinery29 spoke with Patti Wood, a body language expert and author of Snap: Making the Most of First Impressions, Body Language, and Charisma, to decode four major moments of Trump and Putin's encounter.
First off, the pre-meeting appearance the leaders did before the press. In a clip, Trump can be seen winking at Putin. 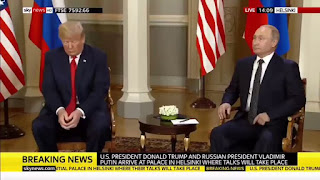 "He was sitting like he normally sits in an alpha position. I’ve read him in this situation so many times and he did a jacket adjustment, which is something I don’t see very often," Wood said. "It’s an anxiety cue, asking 'How am I looking? Do I look good?' But a wink like that with a full head turn indicates "We’re on this. We have a secret. They don’t know."'
She added: "I won’t editorialize on that."
Wood also had some thoughts on how Putin gave Trump a soccer ball to recognize the U.S. will host the 2026 World Cup. Two things that she found interesting were how Putin handed the ball to Trump and the latter's reaction to the gesture. 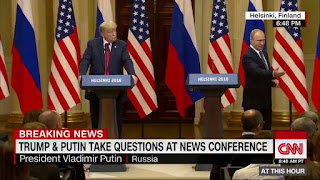 "To me that was interesting because typically when you see a presentation of a soccer ball there’s a toss-off. Instead, he very politely walked out of the podium and handed it to Trump," she said. "It was an accommodating way [to do so]."
She added: "[Trump] did the photo op, but he didn’t take it very seriously. You can tell from his facial expression and manner that he was kind of embarrassed and it was not very important to him. This was emphasized by the fact he said he was gonna give it to his son [Barron.] He was also not a lot in touch with [his wife] Melania. When he tossed the ball, it was not a good toss because it seemed she was not expecting it and therefore didn’t catch it. The whole interaction told me he thought, This is sort of silly and that he’s not a soccer fan."
The issue of the elusive "pee tape" — the allegation that the Kremlin has a secretly-recorded tape of Trump involving sex workers he hired to urinate on the bed the Obamas slept in during their visit to Moscow — was also brought up during the conference.
"Let me tell you this, when President Trump was in Moscow back then, I didn't even know that he was in Moscow," Putin said. "I treat President Trump with utmost respect, but back then when he was a private individual, a businessman, nobody informed me that he was in Moscow."
He added a hypothetical: "Let's take the St. Petersburg economic forum, for instance. There were over 500 American businessmen, high ranking, high level ones. I don't even remember the last names of each and every one. Do you think that we try to collect compromising material on each and every single one of them? Well, it's difficult to imagine on a bigger scale than this. Please disregard these issues and don't think about this anymore again."
The Russian president never denied having compromising information about Trump.
According to Wood, this was one of the most curious exchanges between the press and the two leaders. What struck her was the long period of silence following the question. "Silence is a powerful communicator. It was a sanction to the reporter, she said. "It was almost a punishment as sort of saying to the reporter, 'That's enough.'"
She also pointed out at Trump's reaction when the question came up. "Trump looks down and gives this very interesting upside down smile. It's a joker smile — there's a mischievousness in his eyes about it," she said, adding that Trump was trying to look amused even though he wasn't. "He's withholding his emotions. Then, he does the body turn again to Putin. It's showing they have an intimacy and they're in this together."

For Wood, Putin's body language showed that he was uncomfortable with the
question. "He touched his ear and turns down his head in a way. That particular signal shows [he's thinking], I don't like what I hear." Putin probably didn't like that they were questioned about the Kremlin's interference in the 2016 presidential election, which both leaders have long denied.
Wood pointed out that Trump's body language didn't agree with the statements he was making. "He said, "It's not Russia" but he is saying it with a backward head jerk and his eyes closed. That movement doesn't show congruence with the statement."
In a tweet sent from the president's account, Team Trump seemed to try to mend the aftermath of his comments.
"As I said today and many times before, 'I have GREAT confidence in MY intelligence people.' However, I also recognize that in order to build a brighter future, we cannot exclusively focus on the past – as the world’s two largest nuclear powers, we must get along!"


The language of the tweet was uncharacteristic. But then again, so was his meeting with the Russian dictator.