I have been fascinated by time travel since was 9. I read three or four science fiction books a week as a teenager. Yes, I was and always will be a nerd and yes, I love the movie, “Ground Hog Day” and I have seen the very silly, “Hot Tub Time Machine.” If you are looking for a fun, “It is time for something completely different “read over the summer, here are some of the books I have read.

I read this when I was twelve and I am still amazed at Well’s vision! The writing is a bit stilted, but everyone should read this classic. The Time Machine is a science fiction novel by H. G. Wells, published in 1895. Wells is generally credited with the popularization of the concept of time travel by using a vehicle that allows an operator to travel purposefully and selectively through time. The term "time machine", coined by Wells, is now almost universally used to refer to such a vehicle.

I read it when I was in the sixth grade and the story started my fascination with time travel.  Wrinkle in Time is a science fantasy children’s novel by Madeleine L'Engle, first published in 1963.[1] The story revolves around a young girl whose father, a government scientist, has gone missing after working on a mysterious project called a tesseract. The book won a Newbery Medal, Sequoyah Book Award, and Lewis Carroll Shelf Award, and was runner-up for the Hans Christian Andersen Award.

I read this in the novel “Bid Time Return” my first semester of college. It was later re titled "Somewhere in Time" after the Christopher Reeves movie came out. I can remember sitting on my dorm room bed and being transported by it. It is really a romance novel. Guys may not like it, but it was a delicious read. Somewhere in Time -Matheson's classic novel tells the moving, romantic story of a modern man whose love for a woman he has never met draws him back in time to a luxury hotel in San Diego in 1896, where he finds his soul mate in the form of a celebrated actress of the previous century. Somewhere in Time won the World Fantasy Award for Best Novel, and the 1979 movie version, starring Christopher Reeve and Jane Seymour, remains a cult classic.

I read this when years ago in the fist week the book came out. It is a fast paced summer read. Plan to stay up to finish it. Timeline is a science fiction novel by Michael Crichton that was published in November 1999. It tells the story of a group of history students who travel to 14th Century France to rescue their professor. The book follows in Crichton's long history of combining technical details and action in his books, addressing quantum and multiverse theory. I liked how the characters who traveled back dealt with the rough style of living in the 14th century. Some abated to it readily, and some where horrified. The Movie really didn't convey the fear they had well. 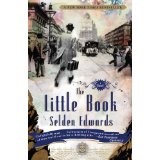 I read this a few years ago and was charmed by the setting in Venice. There are many scenes that take place in coffee houses and famous landmarks. I also enjoyed the characters based on real life figures. For example, it mentions Mark Twain and his family on there stay in Venice when he was on his world wide speaking tour. It also delves, Hitler’s childhood and the strong prejudice that Many Venetians had against the Jews that is very unsettling and insightful. It’s an entertaining book.
The Little Book Thirty years in the writing. Selden Edwards' dazzling first novel is an irresistible triumph of the imagination. Wheeler Burden-banking heir, philosopher, student of history, legend's son, rock idol, writer, lover, recluse, half-Jew, and Harvard baseball hero-one day finds himself wandering not in his hometown of San Francisco in 1988 but in a city and time he knows mysteriously well: Vienna, 1897. Before long, Wheeler acquires a mentor in Sigmund Freud, a bitter rival, a powerful crush on a luminous young woman, and encounters everyone from an eight-year-old Adolf Hitler to Mark Twain as well as the young members of his own family. Solving the riddle of Wheeler's dislocation in time will ultimately reveal nothing short of one eccentric family's unrivaled impact upon the course of human history.

I read this book in the readers copy that my friend Pat gave me after she reviewed it for a magazine. (The book didn’t come out another year)  I have this potent memory of reading it. It was one long reading orgy weekend. I feasted on the story. You have to get to the end. It is one of the best book endings ever written. It is also a romance novel. The movie didn’t do it justice.
The Time Traveler's Wife by Audrey Niffenegger, published in 2003. It is a love story about a man with a genetic disorder that causes him to time travel unpredictably, and about his wife, an artist, who has to cope with his frequent absences and dangerous experiences. Niffenegger, frustrated in love when she began the work, wrote the story as a metaphor for her failed relationships. It is better than the movie.

This is a fun read, though a bit dark at times and the time travel aspect is rather hokey, it is a delight to have Bram Stoker and H.G. Wells Conversing.
The Map of Time Characters real and imaginary come vividly to life in this whimsical triple play of intertwined plots, in which a skeptical H. G. Wells is called upon to investigate purported incidents of time travel and to save lives and literary classics, including Dracula and The Time Machine, from being wiped from existence.

I read this in seventh grade and have not read it since, but I remember feeling the main character’s rage and was hooked on the idea that time travel gave you a chance for a “Do Over.” Dan Davis was tricked by an unscrupulous business partner and a greedy fiancee into spending thirty years in suspended animation just when he was on the verge of a success beyond his wildest dreams. But when he awoke in the future, he discovered he had the means to travel back in time -- and get his revenge

I read this in High School. I don’t think I would like it now but at the time it was thrilling. The Eternity of the title is an organization carefully isolated from the rest of the temporal world, staffed by male humans called Eternals recruited from different eras of human history commencing with the twenty-seventh century. The Eternals are capable of traveling “upwhen” and “downwhen” within Eternity and entering the conventional temporal world at almost any point of their choice, apart from a section of the far future which they mysteriously cannot enter.

I met a guy at a party in the 90’s who had the movie rights to this book. He was passionate about it and was working to get the movie made. I had never heard of the book and bought it immediately. It was a very a great read. It predated the movie Ground Hog Day, and had main characters who keep living the lives over and over again trying to get them right.
Replay is a novel by Ken Grimwood first published by Arbor House in 1986. It won the 1988 World Fantasy Award for Best Novel.
The novel tells of a 43-year-old man who dies and awakens back in 1963 in his 18-year-old body. He then begins to relive his life with intact memories of the previous 25 years. This happens repeatedly with different events in each cycle. The premise was explored earlier by Richard A. Lupoff in his 1973 short story "12:01". The novel was a bestseller in Japan, and its time-loop concept has been referenced as a precursor of Harold Ramis' comedy-drama Groundhog Day (1993).

I love time travel, but I have to say this book was really slow paced and deeply dark. Stephen King loved this story too much and the book needed a better editor.  Stephen King is a great writer and it was interesting but way too long with so much repetition. I loved the way the main character goes back in time, I learned a lot about Oswald. Several guy friends of mine loved it. I think the going back and trying to do your life over again to get it right ( of in Stephens Kings Version to get the whole world right.) was paced more effectively in REPLAY.

11/22/63 Time-travel story where a man finds a diner that connects to 1958... you always go back to the same day. So he starts at the same day in history each time he goes back. So one day he goes back and just stays. He leaves his 2007 life behind. His goal? To get up to November 22, 1963, and stop Lee Harvey Oswald. He does, and he's convinced he's just FIXED THE WORLD. But when he goes back to '07, their is something wrong and we see if he can fix it.

I love this time period. so it was fun to travel back in time to New York. When advertising artist Si Morley is recruited to join a covert government operation exploring the possibility of time travel, he jumps at the chance to leave his twentieth-century existence and step into New York City in January 1882. This book has a few sequels that are also good. The biggest surprise was to learn about the intense traffic problems and pollution in New York City in that time period. I read quite a bit so I was aware that coal mining and manufacturing towns had heavy pollution at that time, but thought of New York City as cleaner.