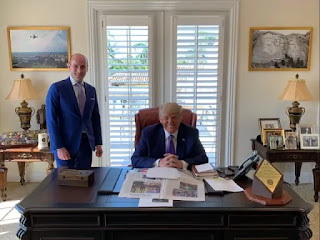 Mr. Trump’s office at his home in the Mar-a-Lago Club in Palm Beach, Florida, is, a monument to his presidency.

The former president is pictured sitting behind an imitation. replica of the Resolute Desk that most commanders-in-chief use in the Oval Office. Specifically, it's a $3,600 Telluride Wood Executive Desk from Hooker Furniture. His chair is highbacked and throne-like brought from his Trump Tower office in New York to the oval office and now it's here in his post-presidency office.

Placed on a side table beside a gilded lamp is a small brass statue of Trump himself. I don’t know anyone who has a statue of themselves in their office.

On the walls on either side of the shuttered doors are two framed photographs. One is an unremarkable picture of Air Force One flying over the White House; the other is of Marine One, with the president aboard, hovering in front of Mount Rushmore before he gave a speech there on 4 July 2020.

On the front right corner of Trump’s desk sits a plaque commemorating the wall he promised to build on the US-Mexico border. made from a piece of the wall at the southern border and was presented to Mr. Trump by US Border Patrol in 2019. Trump promised a “big beautiful wall” that covered the length of the border, approximately 2,000 miles of concrete wall on the US/Mexico border, He was practically elected on that pledge. In reality, only 80 miles of new wall were built during his time in office and some steel fencing.

On the wall are pictures showing Air Force One banking over the White House and Marine One, the president’s helicopter, flying past Mount Rushmore, which commemorates the most significant Presidents in America's first 150 years since independence.

Mr. Trump also has a number of military challenge coins which he brought from the Oval Office. The coins have been used as gifts to foreign dignitaries and American soldiers since Bill Clinton first did so when he was president in the 1990s.

Tucked behind a desk phone stands a bottle of Diet Coke, though Mr Trump is leading calls for a boycott of Coca-Cola following the company’s criticism of Georgia’s strict new electoral laws that threaten to disenfranchise many in the state. (it was once reported that he goes through 12 a day),

There was also some speculation from one Twitter user as to the location of the former president’s new office with the suggestion that it was in a hotel room at the Mar-a-Lago resort given the style of the carpet. The side tables are usually low and are similar to the nightstands in the luxury suites to be nightstands.

I noticed that instead of being on the desk facing towards them so he can see them and enjoy them he has dozen or so photographs on a table behind him, all lined up like as if they’re at a rally. There is his late father, Fred; his children, Eric, Ivanka and Don Jr in London; he and Barron in New York; his late mother, Mary, an oddly cropped headshot of his wife, Melania. I have analyzed and consulted on offices and I have never seen photos placed behind the desk like that. On a few occasions, an overflow of photos are on a side desk but still in view. Here they seem like a sign of status that he has a family.