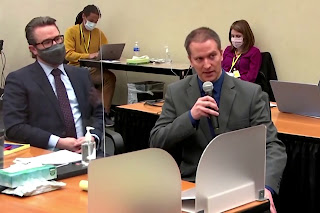 Body language of Chauvin hearing his guilty verdict in this video https://www.dailymail.co.uk/video/news/video-2402584/Jury-finds-Derek-Chauvin-guilty-killing-George-Floyd.html

The fear is clear in the tenseness of the lower eyelids and the way he is raising his upper eyelids the rapid eye movement is him processing the verdict as anyone would first in the emotional limbic brain and going over to the neocortex to the logical thinking brain to decide how to respond. The rapid movement shows his constant attempt to first feel fearful, understand what is being said, and stay calm over and over again. But mixed with the fear are also nonverbal indications of anger, see when his eyebrows lower slightly and are drawn together along with the lower eyelid tension so we see him glaring. I had enough baseline of his normal to detect his shift from fear to anger in these few moments. I would say he did not expect his behavior to have reached this judgment. Remember he had been reprimanded but not fired for similar behavior (kneeling on someone) before this and anyone would be fearful of guilty judgment.

Here’s the story about the moment he spoke to the court and the video itself.

https://www.dailymail.co.uk/news/article-9474599/Derek-Chauvin-trial-Defense-set-call-final-witnesses.html What is striking here is his very erect posture and bearing see how it seems that there is an invisible rod through his back and up through his neck. This is perfect professional posture and indicates he is very aware of his circumstances and surroundings. Also, notice this way he is holding the microphone down away from his face and his heart and instead over his torso with his fingers only lightly holding it with the tips of his fingers extended. He may have been coached to hold the mike in this relaxed unguarded way, but in any case, this placement and grip make it appear he is not tense. You do see The tell of his anxiety his clipped, tense, rapid replies. I coach people to be expert witnesses and to testify before congress and while lawyers tend to coach clients to give short responses, I coach them to breathe and give relaxed naturally voiced responses that are credible. Of course, he is responding to questions about understanding about not testifying but his paralanguage, that is voice tone, tempo, speaking rate, high voice, etc. and his focus on looking at his lawyer in a way that makes it look like he searching for approval that he is doing ok and making the right choice make him sound scared.  The one "tell" that makes him look a bit smug is his chin placement. Chin placement is a key place to read for someone's level of confidence. Confidence is shown when the chin is held at the center.  He holds his neck arched out at one point and throughout holds his chin up above “the centerline” showing he feels superior. I think that is telling because it's very hard to consciously control the chin placement when under stress, so it tends to go to its natural baseline of that person's normal.

The defence’s closing statement, where Chauvin took off his mask for the first prolonged period throughout the trial. We didn’t get to see much of him because the camera was focused on his attorney and insight on why the defence would have him take the mask off just for that section.

I think the mask off was an attempt to have the jury read him and potentially see him be emotional. The background of court trials recently has been controversial in some legal trials they have delayed going forward for fear their defendant won’t be seen on zoom or under a mask as a human/innocent/real. It’s a big concern.

Many of my clients, curious have asked me about his note-taking. It is standard practice for me to coach my executive and politician clients to “take notes” in court cases, testimony, debates and congressional hearing so they will stay focused and occupied, have something to do with their hands as hands often go to “Self Comfort Cues” and overall not be as nervous and NOT GIVE AS MANY TELLS” I give caveats to that advice however saying it's important at times to show respect, caring, and concern partiality.

These caveats were not coached and or shown by him. Because he was labeled as unfeeling and lacking emotion before the trial it was a mistake for him to do it so often. Here the lack of emotion during very painful testimony may have affected the jury’s impression of him negatively. And you have that chin up and often shoulders back as he is taking notes. He looks more natural and humane (that is humane, not human) when he is relaxed down in his chair here.  The constant note-taking and the chin-up which can be seen even with a mask on may have been the reason some people labeled him as looking unfeeling or even labeling him as a sociopath. Every individual has their baseline normal behavior that I use to do a read and we have a standard of normal nonverbal behavior for situations. Because of the long horrific video, this was a trial that caused many people who say the video feel horrific pain and sympathy for the victim so the baseline of normal response for the defendant is expected to show a reflection of our normal even knowing that he feels and considers himself innocent. I know that lawyers may coach a client to show no emotion to make the victim look more guilty, but again we saw the video of the victim's agony so that standard lawyerly advice about how to comport yourself as the defendant in the courtroom could and in this case did backfire.

In regards to his constant notetaking, again there aren’t many videos of it because we only saw glimpses but having watched the trial I can say he was writing on his legal pad constantly, no matter who was on the witness stand or which attorney was speaking.